Extracting mining from our DNA 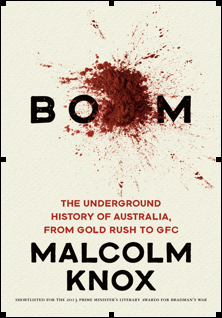 Boom: the underground history of Australia, from Gold Rush to GFC
Review by Charles Roche, November 2013

Boom, is a refreshing tour of the history of mining and it’s impact on, and interaction with, Australia. Refreshing, mainly because Knox manages to discuss mining without being a supplicant observer, a rare feat in the public examination of the Australian mining industry. In doing so, he touches on the dominance that mining has over Australia’s economic, political and cultural identify, what Knox himself refers to as mining in our national DNA. Refreshing also because Knox identifies the cost of mining along with the benefits, perhaps best summarised here, “Mining has given a way of life to generations. Mining has made Australia not only viable but rich. Mining has also left a trail of death, environmental destruction and the dispossession of traditional owners.’ (p.363)

Rather than attempting a comprehensive history, the book uses personal stories and interesting facts to develop a picture, an insight into the Australian mining industry from its early years until today. For example, Indigenous mining experience is told through the experience at Nhulunbuy [Gove], the forced relocation of the Awngthim Aboriginal groups at Wiepa and the role of the Yirrkala bark petition in challenging the myth of terra nullius. Together with personal references to Matthew who guided the geologist to Weipa and Charlie Williams an electrician trying to break aboriginal poverty cycles with mining apprenticeships in the Pilbara.

By far the dominant focus of the book is on the economics of mining. While discussing numerous examples of mining boom and bust, local loss and impact, Knox finds that mining has delivered enormous economic benefits for Australia. Partially countering this and sprinkled throughout the book are references to a corporatised, multinational industry that has captured and dominated the governments that are supposed to regulate them.

The inherent racism of the early mining years against, Aboriginal Australians and Chinese and Italian migrants is juxtaposed with a modern story of Kev and Terry, who moved from the east coast to WA for mining work and now fly-in-fly-out [FIFO] of Indonesia, where they live, half the time ,with their Indonesian partners. Knox also explores the impact of FIFO on communities, but leaves the in-family impacts less explored as has the industry for many years.

The physical danger of mining is presented with stories from the Creswick disaster, black lung disease and mesothelioma from blue asbestos at Wittenoom; in addition to the mortality and morbidity of harsh living conditions and untreated diseases. Though Knox states that ‘(d)eath in mining did not attract the romantic eye of the historians;’ the causes of death listed next to the names of the 810 men who died along the ‘line of lode’ between 1884-1992 at Broken Hill is poetic and tragic and a stark reminder of the personal cost of mining (p. 202).

Perhaps because the environment has no voice, this narrative account only briefly touches on the environmental legacy of mining. While Mt Morgan in Queensland and Mt Lyell in Tasmania provide the content for an examination of shares, mining techniques, profitability, unions and mining personalities there is little said about the environmental impact of ongoing mining legacies.

Knox’s around Australia mining tour finishes with questions about wether mining is part of our DNA (which he acknowledges he hasn’t answered) and warnings for the industry about the impact of mining and gas exploitation on the eastern seaboard. However, Knox seems to have missed, or underestimated, the impact of mining to date on people and country. Thereby minimising both the dominate role mining seems to possess over our political and government institutions at a national level, and over the little people in remote [not eastern seaboard] regions of Australia. In doing so, perhaps Knox does prove that mining is in our DNA, making it difficult to get a clear, objective view from within.

So while a mining industry obsessed observer might wish for more, Knox makes a valuable contribution to our understanding of the mining industry and its role in Australia’s past and it’s future. Lets hope he and others build on it.

Boom: the underground history of Australia, from Gold Rush to GFC

Charles Roche is Executive Director of the Mineral Policy Institute – an Australian based civil society group that specializes in reducing the impacts of mining.