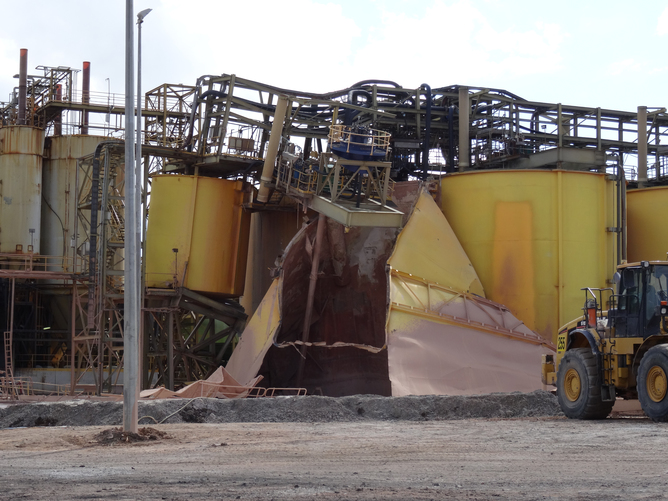 The latest accident at the Ranger uranium mine is a timely reminder of the environmental risks of operating a heavy industry facility: especially a uranium mine on Indigenous land, surrounded by the World…

The latest accident at the Ranger uranium mine is a timely reminder of the environmental risks of operating a heavy industry facility: especially a uranium mine on Indigenous land, surrounded by the World Heritage-listed Kakadu National Park.

But beyond the events of this week, Ranger is a symptom of a much bigger problem of extraordinarily weak environmental regulation.

Before you can take a prescription drug, get on a plane or drive a car, there have been rigorous, independent tests done to minimise the risks of harm to you. We don’t leave it largely up to pharmaceutical or car companies to tell us we’re safe.

So we don’t we apply those same precautionary standards to a mine in the heart of Kakadu?

Last Saturday, one of the 10 large acid leach tanks at Ranger completely collapsed – spilling some one million litres of acidic radioactive ore slurry into the adjacent mill area.

The slurry burst over bunds that are meant to contain such an accident and entered the mill stormwater drainage system which goes to a mine water retention pond.

This is the latest in more than 200 environmental incidents at Ranger since 1979, including:

While the extensive list of publicly known incidents contains many of somewhat minor significance, the repeated serious incidents point to a more systemic and underlying problem.

The uranium industry regularly boasts that Ranger is “one of the most heavily regulated and monitored mines in the world” – and yet predictable industrial accidents still seem to occur at a greater frequency than your average facility.

Perhaps we are aware of the accidents partly because of the greater public scrutiny they’re under.

But in a bizarre coincidence, it has emerged that the collapse of a leach tank at Ranger was the second such incident at a mine mainly owned by mining giant Rio Tinto in less than a week. Precisely the same leach tank collapse also happened at the Rössing uranium mine in Namibia.

The deeper issue which the government and mining industry are desperate to avoid discussion of is regulatory capture.

Over the past few decades, environmental regulation has moved to a model where industry largely self-regulates and self-monitors, while government largely ticks a box to see if systems are in place to manage risks and minimise impacts.

There is very little high-level technical and industrial expertise left within government agencies that are supposed to oversee heavy industrial projects and ensure environmental protection, such as a Department of Mines or an Environmental Protection Authority (EPA).

Instead, our environmental “monitors” are poorly resourced and struggle to maintain staff, especially in light of the more attractive packages working for a company.

It is easy to direct some blame at the regulators, in this case the Northern Territory government.

And it remains unclear just how much action has been taken to independently assess the damage from last Saturday’s spill of radioactive material. This morning, the ABC was reporting that the Office of the Supervising Scientist had refused to comment about whether it has carried out its own tests.

But realistically Ranger and its owners must take the main blame. Under the modern era of effectively self-regulating, they built the tanks, they operated the mill, ran the internal inspection and maintenance program – and yet an acid leach tank still collapsed.

Slaps on the wrist

Across Australia, many local community groups watch their local mine breach statutory conditions and never get more than a slap on the wrist. Just a few examples include:

Such failure to demonstrate safe practice and good environmental outcomes undermines public confidence, which often leads to legitimate concerns and even outright opposition to existing or new mines in a region.

Yet industry and government fail to make the links and think environmental regulation is still best left largely up to companies – and poorly resourced regulators often become the easy scapegoat.

Learning from other industries

Many other industries have learnt how to assess and greatly reduce the risk of catastrophic accidents. These include chemical plants, oil and gas refineries, and construction.

Even in the mining industry itself, 2012 was the first fatality free year for Western Australian mines – the result of decades of effort on safety systems and culture.

Other industries – such as pharmaceuticals, airlines and vehicle safety – have learnt to address public safety in rigorous, independent processes.

While accidents still happen (cough cough BP), in the main, the frequency would appear to be lower than for Ranger.

If governments are serious about public, worker and environmental safety, they need to ensure that regulators are properly skilled and resourced to inspect, assess and act independently without fear or favour.

They cannot let regulators become too close to industry and perceived to be captured and too lenient. In the end, regulatory capture erodes public confidence and reduces trust, leading to project delays, increased costs and greater risks.

The community simply does not accept the “trust us” mantra of a company and its spin doctors as good enough anymore – and nor should they. In the digital age, it is perfectly reasonable to expect real scientific evidence, independence and transparency.

By Gavin Mudd, Senior Lecturer at Monash University, consults to Gundjeihmi Aboriginal Corporation (www.mirarr.net) and is the chair of the board of the Mineral Policy Institute.

With thanks and borrowed from The Conversation