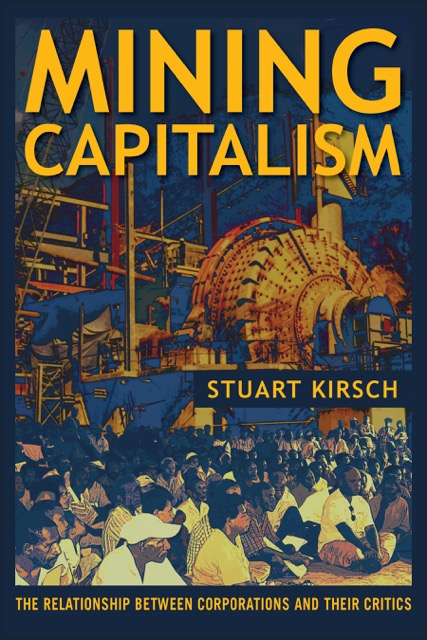 Kirsch’s new book, Mining Capitalism: the Relationship between Corporations and Their Critics builds on an extensive body of work examining reverse anthropology and the relationship between corporations, critics, and indigenous communities, all with a focus on resource extraction, human rights and the environment.

Now a Professor of Anthropology at the University of Michigan, Kirsch started his career in the late 1980’s with ethnographic research among Yonggom people living on the Ok Tedi River in the West Province of Papua New Guinea (PNG). That area and the peoples response to the Ok Tedi mine is the focus of the first three chapters, Colliding Ecologies, Politics of Space and Down by Law. Together they provide a detailed and insightful account of the crisis arising from the Ok Tedi mine, the engagement of communities and international NGO’s, then how legal challenge was argued and resolved, all from the position of participant observer.   This is not just a story about the Yonggom and Ok Tedi, however, but the failure of market-based policies, rooted in neoliberalism, that Kirsch says:

“…[a]llows corporations to continue externalizing costs of production onto society and the environment, despite making widely publicized claims about the social benefits of their activities, their commitment to abide by existing laws and regulations, their willingness to cooperate with the state, and their responsibility as corporate citizens.” (p.1)

It is here that any neoliberal ideologues, proponents of unregulated multinationals and unquestioning corporate social responsibility (CSR) practitioners, might be tempted to put the book down. That would be unfortunate, as they are the audience who needs to understand and learn from the perspective that Kirsch presents the most. Certainly, in my experience, transnational corporations and their one (super) size fits all industrial development apologists, have little understanding about the concepts of choice and self-determination when it comes to development.

Concepts, which if applied to the extractive industry, would translate to free prior informed consent (FPIC) and the ability to decide if, when, how and at what scale mining should occur on people’s own lands. These are rights Kirsch himself has fought hard for, on behalf of others, for over two decades.   Chapter one, Colliding Ecologies, provides a short description of the events surrounding the development of the Ok Tedi mine and it’s massive environmental and social impact.

Kirsch also applies a ‘resource curse’ analysis to the situation, on the usual national scale but also describing what he calls the “microeconomics of the resource curse”. This encompasses the destruction of the environment-dependent local economy, literally subsumed under mining waste. Comparisons between OK Tedi and other troubled PNG and Melanesian mine-sites including Bougainville, Freeport, Lihir and Porgera add an extra dimension, and suggest this is systemic, rather than an isolated incident.   The impact of the Ok Tedi mine on daily life is hard to imagine for those unfamiliar with a subsistence lifestyle, which is deeply interwoven with the local environment. Kirsch overcomes this with some powerful quotes and excerpts.

A short lament, by Yonggom woman, Duri Kemyat portrays both the physical impact on the environment and the existential angst and suffering of the people:

Where I used to make gardens,
The mud banks have built up.
Where I used to catch prawns and fish,
There is an empty pool. . . .
So I feel like crying.

Before it wasn’t like this.
We had no difficulty finding garden food and wild game.
We had everything we needed.
No we are suffering and I wonder why.”
(Kemyat: 39-40).

Activists, environmentalists and their critics will be very interested in chapter two, The Politics of Space. This term Kirsch uses to describe the alliances between local and international critics that enable the campaign to exert pressure on companies wherever they operate. There is a brief, but detail-rich account of the campaign, started by locals, and eventually, supported by an array of international NGOs. Kirsch cites MPI’s first director (p.63), Chris Harris as crediting Ok Tedi as the “main reason” why the Mineral Policy Institute was founded. He also tackles the myth of the protest being orchestrated from outside, making it clear that it was started locally, and that the international NGOs were slow to assist.

Down by Law, chapter three, documents a series of legal maneuverings that started in 1994 and lead to BHP abandoning the mine and gifting it to a Singapore based trust as part of the settlement. (Note: this has recently been overturned and a portion has been given to the people – see the book’s epilogue and Mining Monitor feature article, Decades of Neglect). Kirsch also briefly discusses the Panguna and Freeport legal challenges; leaving the reader with an uneasy feeling that despite the publicity, litigation is a long, complicated and risky proposition. The chapter ends with what Kirsch calls the “politics of time” where intervention is required earlier in the mine development cycle. Here, I readily agree: indeed, MPI’s main focus in PNG is mining along the Watut River and the proposed Wafi-Golpu mine that is still in the planning phase.

The second half of the book turns to the issue and influence of capitalism. Chapter four tackles corporate science at Ok Tedi, identifying parallels with the tobacco and drugs lobby. Here, Kirsch examines the failure of environmental research and science to protect the OK Tedi River, arguing that: systematic bias, deliberate strategies to delay recognition and conceal evidence, misrepresentation, and the abuse of process are all used to limit the effectiveness of corporate critics. Equally as disturbing, is the use of organisational studies to legitimize and institutionalise this approach, allowing corporates to control the science, their relationship with stakeholders, information, how the public perceives the truth and role of critics and NGOs.

The reference to Star Wars and the Evil Empire in Chapter five, The Industry Strikes Back asks the question, who is Darth Vader? Perhaps the World Bank? The International Finance Corporation? Private Development banks? The International Council of Mining and Metals? Or some informal alliance between multinational mining companies who are all intent on a neoliberal agenda that maximizes profits and externalizes costs, hidden behind a thin and controlled veil of CSR?  The chapter, however, has a much more serious focus than a brief un/intended pop-culture reference.

Throughout the book Kirsch details practices of “purchasing legitimacy” through health and conservation programs, (which do have some positive impacts), dividing and co-opting critics, co-opting and controlling the very the language of criticism and dissent, aggressively promoting the industry’s contribution to sustainability, and the appropriation of the audit culture that has arisen since the Mining Minerals and Sustainable Development Project (MMSD) to “simulate reform in order to avoid the imposition of real constraints on its operations” (p.170).

New Politics of Time, Chapter six, builds upon lessons from the failure of the “politics of space” to protect Ok Tedi and other sites. Central to the concept is “…the contradiction between the short-term interests of capital and corporations and the long durée (life or duration) of industrial impacts on the environment” (p. 191). Kirsch then discusses strategies of vertical integration, in-between international and local groups, and horizontal integration, between affected communities, information and skill exchange. In doing so, Kirsch uses the Ramu Nickel case as an example of failure to act in time. It is worth reminding both Kirsch and readers, however, of the work of my predecessors, including Igor O’Neil and Techa Beaumont who edited, authored and published reports on the impacts on submarine tailings disposal at from Ramu mine waste in 1999, 2001 and 2005, which were later relied upon in the final court case.

The chapter has more detail worth identifying. The section on multilateral conditionalities alone (p199-211), is worth the price of book for anyone interested in the development and application of FPIC in the extractive industries (EI). This leads to a discussion of consulta (referenda or community votes) that have been used in Latin America. A tactic that has also found its way to Western Australia with recent votes to oppose fracking by the community in the locality of central Greenough, near Geraldton and by the Yawuru people in the Kimberley. Kirsch then relates several examples of how neither himself, or others, including industry proponents of EI, are able to identify a single responsible mine-site that has good practice across all areas. Indeed, he refers to such a sites as a mythical beast (p.222).

Kirsch finishes the book with an epilogue that is now a little dated, given events in PNG in recent weeks, but recaps the events of 2013. The Ok Tedi timeline will be valuable to anyone examining EI, mining focused NGOs or PNG. Finally, the conclusion revisits the main themes of the book and recapping the “politics of space and time”; concepts, which Kirsch presents as evolutions over time – which accurately describes the progression of the campaign at OK Tedi More generally applied, however, I see them as mutually supportive strategies to be engaged simultaneously, an approach MPI has sought to utilise for many years and is central to our current work. Unfortunately, the modus operandi of most of the international community is to prefer to respond to, rather than prevent disasters.

Mining Capitalism is part academic research part engaging narrative, producing a text that is data rich but enlivening, taking the reader through a story of impact on the Ok Tedi River and then analysing the actions of the corporations and their critics. Similar to Kirsch’s acknowledgement (p.12, 232) that he was unable to write from a neutral position, this is not an unbiased review. MPI shares a long history with Professor Kirsch and is referenced in the book. So while somewhat biased, the book is a must read for those interested in PNG’s future, activists, researchers and anyone on either side of the dialectical views on the corporatism of nature and the impacts on communities, especially in developing countries.