With the construction phase of the mining boom over and demand for Australia’s energy and mineral resources waning, now is a good time to reflect upon the issue of mining legacies and what they mean for our connections to landscape and place – our ‘sense of place’.

The extractive industries transform the landscapes within which they occur. Some of these transformations can be small and discreet, while others leave us awestruck by their immensity. However, no matter the scale, and regardless of what is being produced, it is inevitable that mining operations eventually come to an end, leaving behind a legacy of altered environments and changed landscapes.

The term ‘mining legacy’, as defined by Whitbread-Abrutat (2008), broadly refers to “the impacts of a mine that continue to negatively affect the environment or associated communities” (p. 3). Legacy mine sites include those that have been recently or prematurely shutdown, abandoned mine sites left in various states of decay and ruin, and land used to store the by-products and wastes accumulated through the mining process. There are approximately 50,000 known mining legacy sites in Australia, though the actual figure is likely to be much higher (Unger et al., 2012). 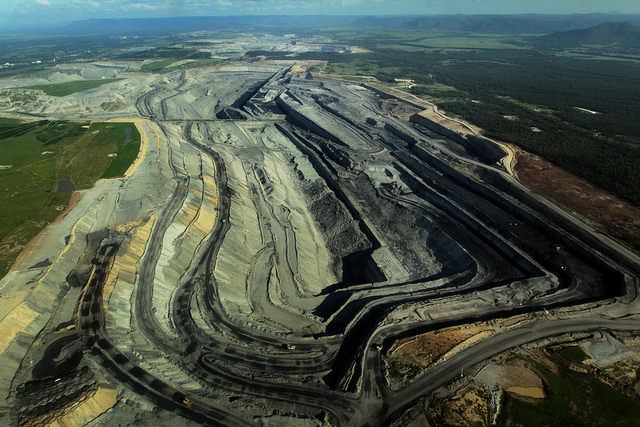 When discussing mining legacies, we typically speak of the risks they present to human and environmental health, and who has responsibility for the maintenance or rehabilitation of affected land. Although these are important considerations, we rarely consider the non-material and non-economic risks legacy mine sites pose to our psychological health and our emotional wellbeing.

Only recently are we beginning to rediscover the importance of our connections to particular environments for our mental health and wellbeing. I say ‘rediscover’ as such notions have informed Indigenous understandings of human health for millennia. The environments that we live within are more than simply a collection of material objects set against a psychologically inert geographical setting: often, they are places imbued with deep intrinsic value and emotional significance. It should come as no surprise that research has consistently found the place most important for our mental health and wellbeing is the home. In addition to being an ‘irreplaceable centre of significance’ (Relph, 1976, p. 39), the home often provides individuals with a sense of identity and belonging, as well as feelings of security, solace and control. It is because of these qualities that the ‘health’ of our loved places matter for our own psychological health and emotional wellbeing.

Though we all, perhaps implicitly, understand the importance of such places for our own mental health and wellbeing, it continues to be a peculiar facet of modern culture that such understandings only tend to become clear once we have endured a forced separation from a loved place, or if a home environment is destroyed.

One of the first medical practitioners to formally document the trauma that can result from a forced separation from a loved home environment was the young Swiss medical officer, Johannes Hofer. In 1688, Hofer published a thesis that described the severe psychological pain, as well as the multiple physical ailments he observed amongst soldiers fighting a war on foreign land who expressed an intense longing for their homelands. Amongst the ailments observed were: insomnia, loss of appetite, weakness, fever, and an all-consuming obsession with the idea of home. Such were the intensity and severity of the mental distress and physical dis-ease experienced by some men, Hofer feared longing for a homeland may cause some men to fall into a ‘stupor’, resulting eventually in their death.

To give voice to his observations, Hofer created the term ‘nostalgia’ – a neologism developed from the Greek nostos (return to home or native land) and the New Latin suffix algia (suffering, pain, or sickness) from the Greek root algos (Albrecht, 2012). Over time, nostalgia was supplanted by the modern term ‘homesickness’ – literally the distress or ‘sickness’ one may feel when separated from a loved home environment. Nostalgia found definition as a medical disorder up until the mid-twentieth century. Today, however, nostalgia and homesickness are no longer regarded as medically-defined illnesses in their own right.

This is not to say that places no longer matter. One only has to turn on the nightly news to witness the devastation experienced by those displaced and dislocated by war, famine, floods and fire. What has been less clear, however, to residents and social researchers alike, have been the mental health consequences for residents living within a degraded or a degrading home environment. Observing this void in our understanding, the Australian environmental philosopher, Dr. Glenn Albrecht, created the term ‘solastalgia’ to describe this formally unrecognised and overlooked form of place-based distress. While ‘nostalgia’ and ‘homesickness’ are concepts used to describe the distress people may feel when separated from a loved place, ‘solastalgia’ refers to the pain and dis-ease felt by people living in a home environment perceived to be subject to negative environmental change. Put simply by Albrecht (2005): “solastalgia is a form of homesickness one gets when one is still at home” (p. 45).

Solastalgia is finding application in a growing number of contexts where people’s endemic sense of place in coming under threat by globalised drivers of environmental degradation (e.g. anthropogenic climate change, globalised flows of capital and modes of economic production). However, it is perhaps not surprising to learn that solastalgia was created in response to the place-based distress felt by residents contending with large-scale open pit coal mining in in the Hunter Valley region of New South Wales.

The Hunter Valley, known for its wine and thoroughbred horse industries, has also become a ‘climate hotspot’ over recent years as the coal industry has sought to expand its activities in response to high global prices. As of 2012, open-cut mines covered some 315 square kilometres, or approximately 16 percent of the Upper Hunter Valley (Rosewarne & Conner, 2012, July 3). By 2013, the Hunter-Newcastle coalfields were producing over 100 million tonnes of saleable coal per year (Department of Industry, Resources and Trade NSW, 2013).

Research investigating the lived experiences of residents living near existing and encroaching open-pit mines tells a story of emotional and psychological displacement, dislocation and disenfranchisement, with attendant negative consequences for their sense of identity, belonging, control and good health. For some, solastalgia manifested as anxiety, insomnia, psychosomatic illness and feelings of hopelessness and powerlessness (Albrecht, 2005; Albrecht et al., 2007). In others, the pain of watching a loved landscape desolated by large scale mining activities motivated them to avoid the affected landscape altogether. As one indigenous man told researchers in a 2007 study into the psychological impacts of large scale coal mining:

It is very depressing, it brings you down . . . Even (Indigenous) people that don’t have the traditional ties to the area . . . it still brings them down. It is pathetic just to drive along, they cannot stand that drive. We take different routes to travel down south just so we don’t have to see all the holes, all the dirt . . . because it makes you wild.(Indigenous interviewee) (Albrecht et al., 2007, p. 97).

Despite the recent massive fall in the price of coal and strengthening calls to ban new coal mines due to their role in exacerbating human-caused climate change, industry and the Federal Government are set to expand coal mining in the Hunter Valley and beyond. For instance, earlier this year the New South Wales Planning Commission gave approval to Rio Tinto to extend their massive Mount Thorley-Warkworth open pit coal mine, placing at risk the small town of Bulga. Further afield, the Federal Government has also recently re-approved Adani’s controversial Carmichael coal mine (a mine that will produce enough coal that, when burned, will have the same climate footprint as Malaysia) and has given the go ahead for Shenua to develop the Watermark coal mine in the Liverpool Plains of NSW, a region that contains some of the richest agricultural soils in Australia. These recent approvals clearly demonstrate the extent to which government interests have become aligned with those of the powerful coal lobby. And while multiple conflicts are emerging between affected residents, concerned public, State and Federal Governments, and the coal industry itself, we are only beginning to grasp the emotional and psychological battlefronts upon which these conflicts will play out.

We must also remember that these mining operations have the potential to negatively impact community members for generations to come. Although new mining developments receive much attention and fanfare in the Australian media and amongst those in the conservative political ranks, very little attention is given to the fact that 75 percent of all mining ventures close prematurely or unexpectedly (Laurence, 2011). It is an indictment on State and Federal Governments that no co-ordinated regulatory framework exists for dealing with legacy mine land, as is the lack of acknowledgement given to the non-material and non-economic costs to individuals and communities from land left to sour after the mining industry has up-stumps and moved on.

There are opportunities for social scientists and concerned health practitioners to further our understanding of the health impacts on residents – mental as well as physical – of living in legacy mine land. Indeed, such knowledge is needed if we are to appreciate the full extent of the legacy left to us and to future generations from Australia’s mining industries. However, until such time mental health is seriously considered in the regulation of legacy mine sites, the scars enacted upon place will find reflection in the solastalgia felt by affected community members.

Rosewarne, S., & Conner, L. (2012, July 3). Coal curse: the black side of the subsidised resources boom. The Conversation. Retrieved from http://theconversation.com/coal-curse-the-black-side-of-the-subsidised-resources-boom-7801