The Morobe Province of Papua New Guinea is an old gold field – where mining dates back almost a century and still continues. The community are therefore no strangers to the risks and impacts from gold mining, having seen some of the world’s biggest dregdes suck up rivers and re-arrange floodplains and channels.

While the hey-day was the early to mid-twentieth century, centred mainly around the small towns of Wau and Bulolo, in the past decade large scale gold mining has returned to the Morobe Province and with even bigger mines planned. As part of its long-term work in PNG, the Mineral Policy Institute (MPI) visited the Morobe Province in February 2011 and April 2012 to meet communities and hear their stories and concerns, as well as visiting the Hidden Valley gold mine. This is a brief review of the scientific side of the recent trip, including the basic issues concerning impacts from Hidden Valley and lessons to be learnt for the prospective Wafi-Golpu copper-gold project.

Let’s look at the Morobe mining landscape. The Hidden Valley gold (and silver) mine was built by Harmony Gold from South Africa over 2006 to mid-2009, with Newcrest Mining from Australia buying in to the project in mid-2008 to form the Morobe Mining Joint Venture or ‘MMJV’ (shared 50-50%). The MMJV operates the Hidden Valley mine and all exploration work on MMJV tenements, which includes the large Wafi-Golpu copper-gold deposit.

The annual and cumulative production from mines in the Morobe Province is shown in Tables 1 and 2, along with reported mineral resources in Table 3. Comparisons to other major PNG mines are also included.

Based on these table, it is easy to see why gold and copper miners want to have a presence in the Morobe Province – the deposits can be large, and if Wafi-Golpu proceeds to development, it could be as big as Ok Tedi in annual production or even bigger.
There is, of course, the ‘BUT’ … the big HOWEVER … 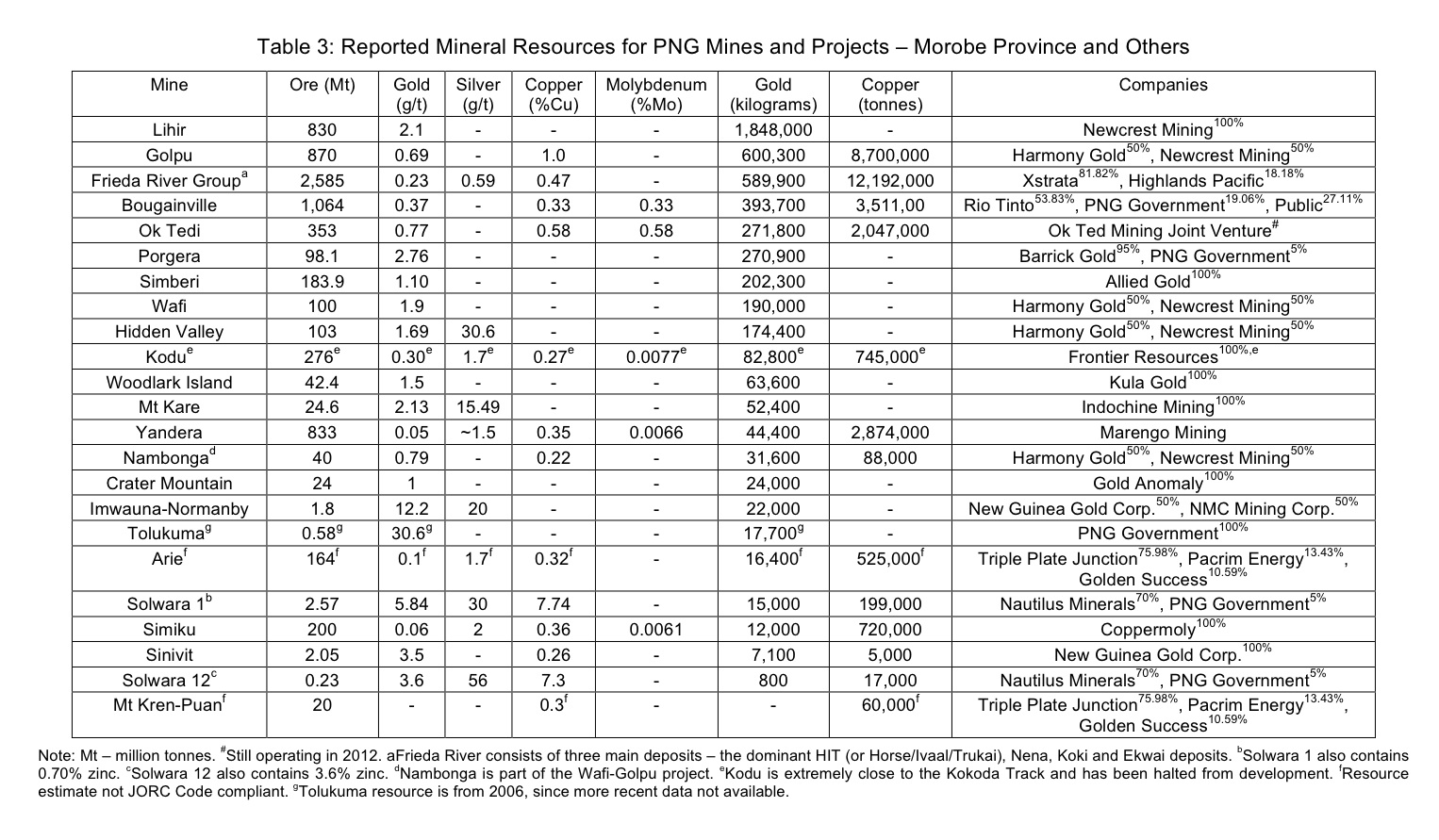 The modern gold mine in the Morobe Province is large – unlike its much smaller historical cousins. In just a few years, for example, the Hidden Valley project has probably mined as much ore and waste rock as the previous 75 years or so. Unlike Ok Tedi, Porgera and Lihir, though, the Hidden Valley did build an engineered dam to contain tailings after ore processing to extract gold. The Hidden Valley mine is located in the mountains above Wau and Bulolo, at a height of some 2.5 kilometres – where the terrain is very steep, rainfall is high and large earthquakes are frequent – all the usual reasons why mining companies have said they can’t ever build a tailings dam to contain their waste and yet Hidden Valley has done it. And that is no mean feat – the first large scale engineered tailings dam for a mine in PNG and for this they certainly deserve credit.

However, during construction of the mine (2006 to 2009) there were inadequate environmental management controls in place to address risks such as erosion to rivers. The environmental impact statement (EIS) for the Hidden Valley project in 2004 predicted that there would only be minor additional erosion from the mine and this tiny bit of extra sediment would go half to the Bulolo River and half to the Watut River, which flows into the Markham River just up from Lae. The extent of erosion of waste rock during construction proved to be severe and it went almost entirely down the Watut River – the largest river in the Morobe Province with literally hundreds of villages and communities dependent on the Watut River for their daily needs.

Needless to say, the downstream communities have raised numerous concerns about social, economic and environmental impacts from this excessive erosion. In 2009, the Union of Watut River Communities was established to be a common and united voice for the people. The Union invited MPI to visit the Morobe province, first occurred in February 2011 and a longer follow-up trip in April 2012.

The MMJV has publicly admitted the issues with erosion into the Watut River, and since 2009 has worked to address the problems and they now claim the issues are resolved and proper environmental management controls are in place. The MMJV has also paid some compensation to some affected people and communities, but there remains significant controversy over the MMJV’s approach and basis for compensation – many people still feel they have not had their concerns addressed or received adequate compensation for the damage they believe is due to the excessive mine waste now making its way down the Watut River.

For the 2012 Morobe trip, MPI wanted to make an independent assessment of the environmental impacts and management of the Hidden Valley mine – had the MMJV fixed the erosion problems on site? had the sediment loads and water quality in the Watut River improved since 2009? how severe were the residual impacts from the erosion? what did the downstream Watut River communities feel and think about the transparency of the MMJV?

Unfortunately, the MMJV has (to date, June 2012) refused to provide the detailed environmental studies on the impacts from Hidden Valley – not even its statutory environmental monitoring. For Newcrest, the 2011 environmental monitoring report for the Cadia Valley operations in New South Wales was completed on 6 February 2012 – and was available from Newcrest’s website from 14 February 2012, showing that it is possible to be transparent and prompt in public reporting.

The PNG Government commissioned an Australian engineering consulting company, SMEC, to complete an environmental audit of the Hidden Valley project in early 2010 – and SMEC confirmed the excessive erosion into the Watut River, the lack of a proper environmental management system during construction, and a range of other significant issues on site (eg. inadequate wastewater treatment capacity, poor landfill practices, etc). However – there is always that ‘HOWEVER’ – SMEC was not able to get access to the most recent data, meaning they could not verify if the erosion was still occurring, or at what reduced rate, and whether the water quality in the Watut River was improving as environmental management was improved. Of course, SMEC was only proving what the Watut River communities already knew – the Hidden Valley project had caused significant impacts on the Watut.

During the April 2012 trip up the Watut in a dugout canoe and driving to villages in the Bulolo region, it became very clear very quickly that the communities remain starved of information on Hidden Valley – especially concerning the extent of environmental impacts during construction and ongoing issues from production. The vast majority of people had at least heard of the SMEC report but had never seen it in print – and a major task for MPI was the explanation to the numerous communities we visited of the findings from the SMEC report. During every meeting at the villages, MPI would explain the basic issues and problems which SMEC had identified (and our own views also) – especially the excessive erosion during construction – and listen to community concerns about the health of the Watut River and their communities. Every village meeting was packed to overflowing – people were eager to hear an independent view of the issues.

For the Watut River communities, the lessons from Hidden Valley are obvious – make sure that all communities are informed about the potential social, economic and environmental
impacts of mining (and not solely economic benefits). If the giant Wafi-Golpu project is to proceed, it will need to heed the lessons from Hidden Valley and the MMJV and the PNG Government will have to ensure that environmental management is strongly resourced and strictly implemented to avoid yet another round of severe impacts on the Watut River. Clearly, words and rhetoric are not enough to protect rivers and communities from poorly managed mining projects.

MPI is now working hard to finalise our review of mining issues in the Morobe Province, including the SMEC report, comparing that to the original Hidden Valley EIS, documenting community concerns and aspirations, and examining the lessons for Wafi-Golpu. The major review report and associated video documentary should both be ready in August.

On a personal note, my young engineering student eyes were opened to the severe environmental impacts from mining when BHP were sued over Ok Tedi in the mid-1990s – Hidden Valley, to its credit, has broken the mould and proven you can design, build and operate a tailings dam in a context of high rainfall, steep terrain and strong earthquake risk and avoid the Ok Tedi scenario. This does not mean, ‘of course’, that you reduce environmental management of other aspects of mining – such as erosion and impacts on adjacent rivers. With the giant Wafi-Golpu project looming as the next big thing for PNG, MPI hopes that by being involved and on the ground BEFORE the project receives government approval, that the Wafi-Golpu project can finally set a high social, environmental and economic standard for mining in PNG – and if it can’t meet these reasonable minimum standards, the Morobe community has every right to say NO.

RIO Tinto, the war on Bougainville and resistance to mining