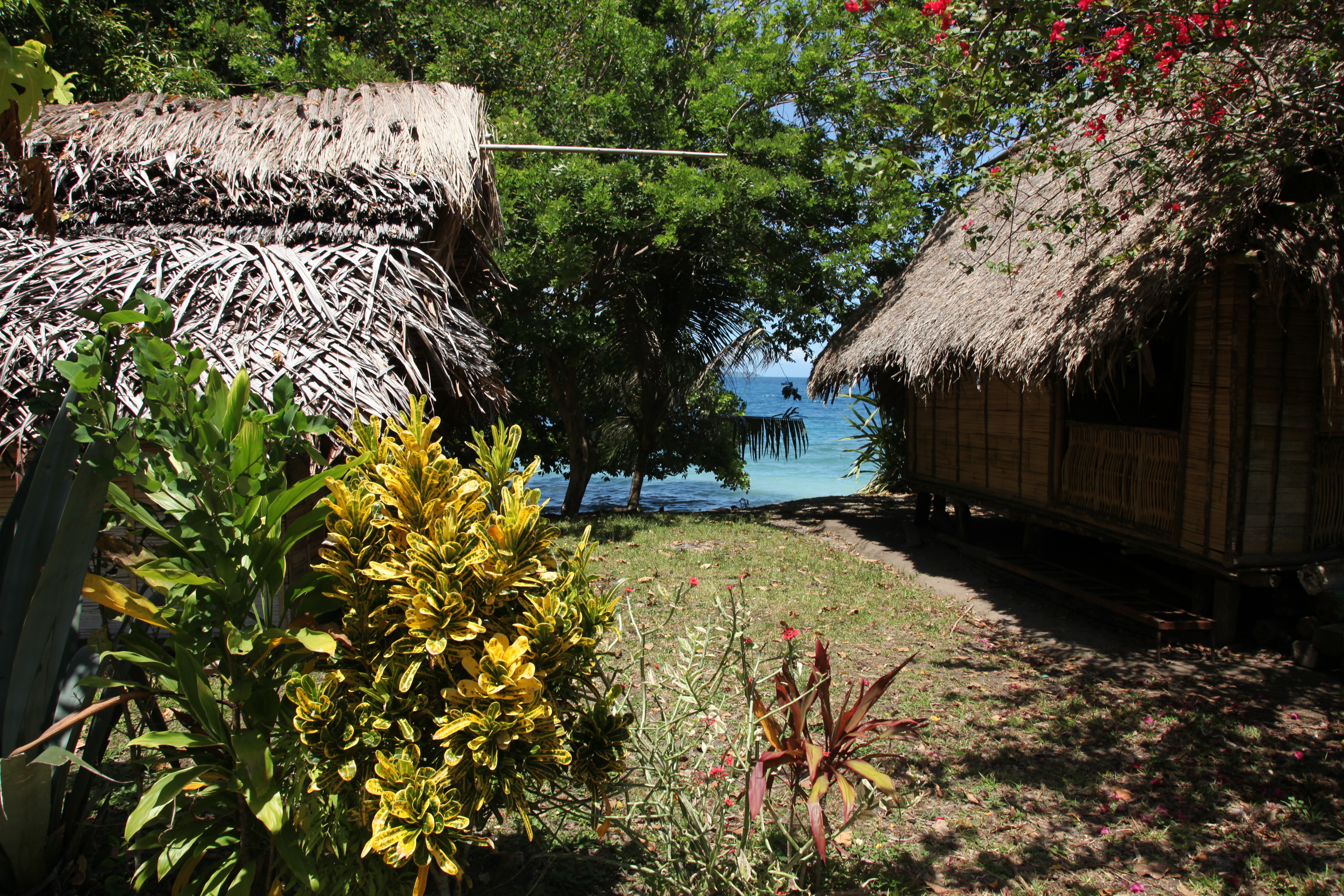 The impact of mining is often obvious. Examples of positive benefits and the negative impacts are repeatedly demonstrated. In Western Australia we have see the rapid bust following the spectacular boom of the mining industry, and in Papua New Guinea (PNG) the expatriation of profits and associated impact from riverine tailings disposal at the Porgera and Ok Tedi mines.

There are also less obvious impacts from what the West calls development, such as increases in domestic violence and HIV Aids often associated with mining in PNG. Perhaps even more disturbing is the fundamental way that development, the assumptions it’s based on, and the values that underpin in it undermine the relationships and connectivity between communities and land. Where development is accompanied by, or perhaps built on, a loss of agency (capacity for free thought and action) and autonomy from the very communities it purports to assist.

In two companion articles, Professor James Leach, Director of Research for the Centre de Recherche et de Documentation sur l’Océanie and an ARC Future Fellow at the University of Western Australia, explores the indirect impact of mining-led development on the Reite Village in the Madang Province of PNG. In an engaging narrative that presents the lived reality of the communities to the reader, the articles challenge basic assumptions about customary land, property and development.

This article is part summary, part review and part discussion. It’s impossible in a short article to understand the Reite Community or do justice to Leach’s three years of participant-based observation there. Rather, the aim is to understand mining-development in PNG; seeking a path than contributes to healthy and just societies supported by ecological well-being.

The Reite village is twenty kilometers from the Basamuk Bay processing plant that is connected to the Kurumbukari nickel mine by a 130 kilometre pipeline. The ore is processed at Basamuk Bay and shipped overseas with the mine waste disposed of via a 150 meter deep pipe into the 1500 meter deep Basamuk Bay canyons.

The values and belief systems of the Reite communities is illustrated by their bark-fibre skirts which have named patterns in the skirts and are owned by, and deeply connected with, particular kin groups and places. The skirt pictured below, carries the design Tupon sarrung, which means ‘waterfall,’ and brings together the movement of the waterfall and the person as one, enhanced by the swish and flow of the dance. Even in this basic description, the interconnectedness between land and people is apparent.

Leach writes of the reproductive power of community, experiencing people who”…are, in a very real sense land made mobile, containing as they do the power, substance, knowledge and history of specific lands.” (Leach, 2011, 312) Here, land is not institutionalised through ownership or state sanction but is collectively held and nourished through interconnected life and ritual. The design on your skirt tells others where you are from – a place of shared land and exchange as the basis of cultural life and kinship, a place where the relationship between land and people is complex, multifaceted and interwoven across time. 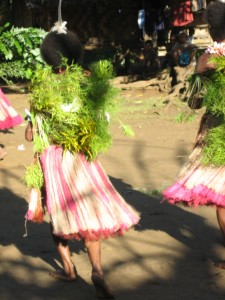 The change in communities is captured by Leach’s description of a ‘time of taro and yam’ and a ‘time of money’. Like many communities in PNG, Reite people rely on starchy crops (like taro, banana, sweet potato, sago and yams) as their staple food, and in their case it’s taro. But as the skirts are more than clothes, taro is much more than food. Professor Leach describes a centrality of taro, with the subsistence role of taro indistinguishable from taro as form and structure in social life. There are specific ways of growing taro, which is passed down in initiation rights by maternal kinsman, tracing the history of how they came to grow taro. The history of taro and people is connected to land and ancestral entities in a myth of taro called Samat Matakaring Patuki.

Now though is the ‘time of money’, with communities wanting to capitalize on the opportunities brought by development to make money, to counter the fact that twenty toea, has no power, that is twenty toea does not buy much. Indeed, this is seen as the right, moral way, of realising value from the land. Which, without direct development from the mine, is sought through resource intensification. Effectively resulting in a marked increase in the commodification of agriculture as communities seek to sell more produce to those in and around the processing plant as they pursue the opportunityor ‘time of money’.

Unfortunately the ‘time of money’ is both dependent on, and at the same erodes, the ‘time of taro and yam’. While communities seek opportunities to earn additional income, the communities remain subsistence-based. A life where people still use shifting cultivation for gardening and the raising of domestic animals, supplemented by hunting in the forest. Leach writes that the “…Reite could not be sustained without the foundation of the subsistence regime; the social organization, mutual support, and kind based exchange (including labour) that are integral to taro and yam cultivation.” (2014, p.58).

Far from being an abstract notion, Leach writes that the system is on the edge of collapse with the forest being cut far too rapidly to maintain fertility and allow regeneration to occur. So rather than gaining from this ‘time of money’ it “…is unsustainable in a very immediate sense, and worse it is destroying the foundation for an existence based on the cultivation of tubers.” (2014, p.58).

This is not written as a criticism of a community for seeking development, but in recognition of the unintended consequences of industrial development. Startlingly, this time it’s not a community resettled, or living on a river filled with mine waste, but a community on the fringes, just seeking a better life.

While the impacts on the future of subsistence agriculture are easily seen in increased land-clearing, less apparent is the flow-on effects on social and cultural life and the strong food/land ties that bind them together. Both the skirt and taro examples relate to the strong, indistinguishable connections that subsistence and clothing have with the culture, history and the land. So by this point, hopefully we can see that ‘land is life’ (a much heard PNG saying) in a far deeper multifaceted sense than development based on western liberal traditions would have us believe. 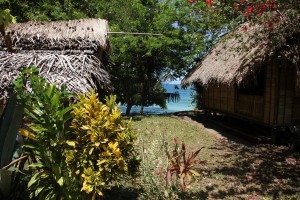 Leach refers the reader to J.G.A Pockock (1992) in both articles as he explains how western ideas of property reduces land from a vital relationship, to a simple ‘right to use and dispose of’. Essentially saying that the Reite relationship to land and the western tenured system are different, perhaps, I would say, incommensurable. Again, rather than an abstraction, this understanding is crucial to the debate, as the PNG legislative process for deciding who is, or are, the customary owners, is grounded in a reductive system that favours clean lines and outright tenure of instead of complex interactions and shared ownership. Or, as Leach writes, where the fundamental relationship with land is changed as economic value takes precedence over other values.

The proximity and possibility of development brings a range of stresses alongside opportunities, including the fear of losing their land to external development, or of missing what seems like the only chance for development. The fear that Palota expressed of losing his relationship with the land he was named from without his knowledge (2011, p.296). Leach describes a “…shift in assumptions from when customary ownership tenure was a mode of autonomy to one in which customary ownership is a kind of property ownership.” (2014, p.58)

Separated by time and space, it seems unbelievable that post-enlightenment western liberal views on the centrality of property ownership, could now impact on the Reite and customary land ownership in PNG. A history with shared land interwoven with social activity and cultural values; exchanged for a single alienable asset that must be capitalised on to be of value. A change where complex interactions with the land are compressed into a singular notion of land as property in a process perhaps best described as legal colonialism.

Leach, supported by questions by Palota, (2011, p.296) describes this process as a loss of autonomy. Not a denial of sovereignty by force, but by an ill-balanced and thoughtless process resulting in the drastic and sudden narrowing of the value of land that sees communities sacrifice much in the pursuit of the chimera of development. Where “…(F)far from giving greater sovereignty. ‘The time of money’ and its underlying mechanism of the individual exploitation of property amounts to the ceding of sovereignty to the state, and the interests of the corporations it relies on for its income.” (2011, p.58)

The fact that communities actively seek this development does not lessen the impacts, but should remind us that communities need all the facts and a clear understanding of the impacts of development in order to make informed decisions. This perhaps is the biggest challenge. Unfortunately, rather than slowing down, mining companies and advisors from Australia, continue to promote a system that brings destruction to communities in the pursuit of western development.

Leach is not anti-development, nor am I, but we both I believe, seek an honest discussion of what ‘development’ means and how it could be better done in PNG – for the benefit of the people, rather than the developers or miners. As one who focuses on the direct impacts from mining, Leach’s work, detailing off-site or fringe impacts has disturbed me.   For while already aware of, and seeking to, reduce cultural fragmentation from mining projects, the story of Reite brings that impact to life. It is also a call for help and a stark warning to other communities in PNG seeking development, the proponents of such ‘development’ and even for those who seek to lesson the impacts.

For those who want to follow up on the Reite or Professor Leach then start here http://www.jamesleach.net/index.html