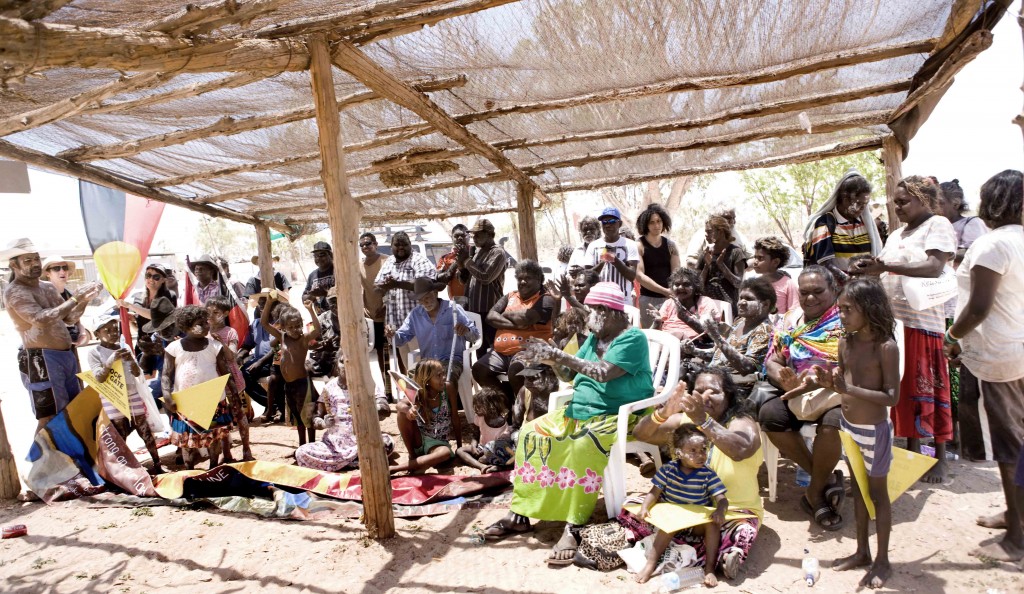 A report published today by the Mineral Policy Institute on environmental risks at McArthur River Mine in the Gulf of Carpentaria makes the case for an immediate inquiry into the mine’s operation and evaluates pit backfill as the preferred option for pollution control.

The report was commissioned by Traditional Owners for the mine site and McArthur River which has been heavily impacted by pollution and acid drainage caused by reactions in the mine’s waste rock dump.

“We don’t like what the mine is doing to our community, making people and the country sick. We asked for this report to be done independently because we can’t trust the company or the government to manage the problems properly. We want the next NT government to start listening to us and the experts, stop mining and making the problem bigger”, said Nancy McDinny, a Borroloola Elder whose artwork helped fund the report.

The report critiques the repeated failures of the current environmental impact assessment framework, pointing out that all previous EIS’s had failed to understand or address the environmental risks presented by McArthur River Mine, and recommends greater transparency around mine rehabilitation financial and environmental planning.

The report’s lead author, Dr Gavin Mudd, is a Senior Lecturer of Environmental Engineering at Monash University and one of Australia’s leading experts in acid metalliferous drainage (AMD) management on mine sites. Dr Mudd is also Chair of the Mineral Policy Institute, an Australian-based international civil society organisation working to assist mining-impacted communities and on achieving industry reform through improvements to mineral resource policy, law and practice.

“The history of the McArthur River project shows clearly why we need comprehensive Environmental Impact Assessment (EIA) processes, credible rehabilitation scenarios and rigorous financial assurance mechanisms to address the complex risks like acid mine drainage – it is time we examined this history to understand what went wrong, why and determine how we can secure a sustainable outcome for the environment and communities of the Borroloola region.”

“The McArthur River project is a classic case study in why the industry needs to start accepting complete pit backfill as an appropriate rehabilitation outcome in order to protect local environments and communities in the long-term – major risks such as acid mine drainage demand nothing less.”

The report details a complete pit backfill scenario for the millions of tonnes of acidic and reactive waste rock to prevent ongoing acid drainage problems impacting the health of the McArthur River, in contrast to operator Glencore’s preferred method of clay capping which has a demonstrated high failure rate and carries significant long-term risks.

The Northern Territory (NT) of Australia, home to the Gurdanji, Mara, Garawa and Yanyuwa Peoples. Discovered in the late 1950’s and mined since the mid- 1990’s the deposit remains one of the world’s largest mineral resources of Pb–Zn–Ag (Mudd et al, 2016). The McArthur River, from which the mine takes it 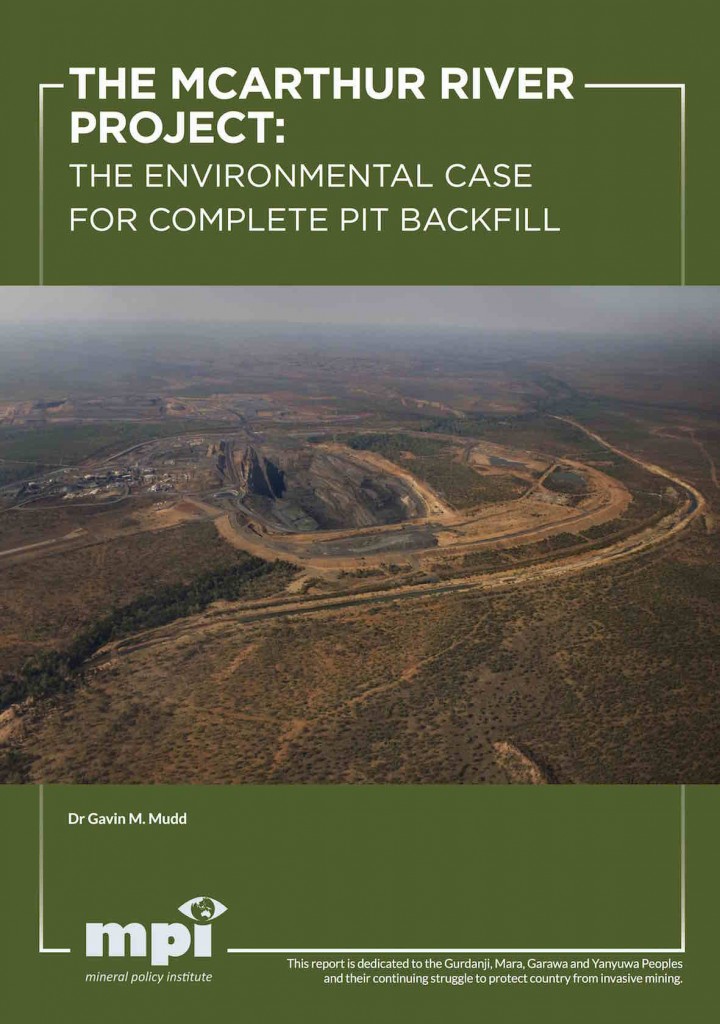 s name, is seasonal, changing from a chain of ponds in the dry to a tropical torrent in the wet season on its 300km journey to the Gulf of Carpentaria.

In terms of Australian and world Pb–Zn mining, the project is technically difficult and has had a challenging history—on many fronts. The initial challenges faced by McArthur River were predominantly technical in nature with the very fine-grained ore being difficult to treat with the standard ore processing (or milling) technology of the time, resulting in the project laying dormant until the early 1990’s when improvements in technology finally allowed development (see Mudd, 2007; Mudd et al, 2016). The deposit lies mostly under the McArthur River itself, which forced the use of underground mining initially until the technical challenges and poor economics of this approach necessitated the switch to larger scale open cut mining and diversion of the project’s namesake river in the mid-2000’s—but with considerable controversy and protracted litigation by the indigenous community (e.g Howey, 2010; Young, 2015). In recent years, major concerns have been raised over acid mine drainage, waste rock, tailings and water management—especially plumes of smoke originating from the waste rock—and the implications for the longer term future of the project area.

The mines controversial history cannot be read in isolation; rather it is represents a continuation of a history of neglect and suppression of the Aboriginal people from Borroloola, which is only exceeded by the trauma of the many massacres by settlers and government agents (Roberts, 2005). The early years of exploration, the impact of the first mining proposal and the response from local communities to mining was well captured by the film ‘Two Laws’1. In it we hear not just of the clash of laws, but a clash of value systems, with the traditional owners fighting to control their own land and future. During the late 1970’s to early 1990’s, this struggle for indigenous land rights was opposed by the joint efforts of the NT Government and MIM, who were later supported by the Federal Government in the 1990′s keen to fast track the mine to mollify the mining industry and international investors after the Mabo decision and the establishment of native title (Young, 2015).

Long before the community resorted to legal challenges (discussed later) to the mine, they had been raising strong objections to it, particularly in relation to the protection of sacred sites and potential environmental impacts, especially to the McArthur River. Young writes of the “…aboriginal traditional owners being subject to governmental pressure, obstruction and chicanery at almost every turn” (2015 p.15). This is not to say that opposition to the mine was universal, far from it, but concern over the environment was strong and at the heart of all concerned, whether in favour of the mine proceeding or not. Concern about and opposition to the mine has continued, with spikes of resistance occurring in relation to the river diversion, the ‘burning waste dump’, potential contamination of the river, sh and grazing cows, pollution issues at the Bing Bong Port and the inaccessibility of cultural sites on the mining lease.

While not the focus of this report, the cultural, social and environmental history of the region and the actual and potential impacts from McArthur River mine is a dominant factor in the region. Denied of control, the local communities continue to bare the brunt of the negative impacts, while government and industry collude to deny and downplay impacts.

This report is a review of the current state of technical issues at the McArthur River project, including the site history, environmental impact assessment (EIA) history, waste rock, tailings and water management and associated acid mine drainage issues. It examines the technical arguments for and against complete back ll of waste and tailings into the eventual final void, thereby achieving environmental outcomes that are aligned with community expectations for mine site closure and rehabilitation. It is unfortunate that so much of the information about the McArthur River project remains uncertain or unpublished, limiting transparency and independent analysis—especially since elsewhere the Australian mining industry is adopting greater openness in reporting and access to data (e.g. Newcrest Mining and Cadia).

The report provides a unique and independent assessment of the issues and risks which need to be considered in detail and possible future outcomes for the McArthur River project, especially long-term environmental outcomes relating to mine wastes.