From the mountains to the sea; following the Watut River 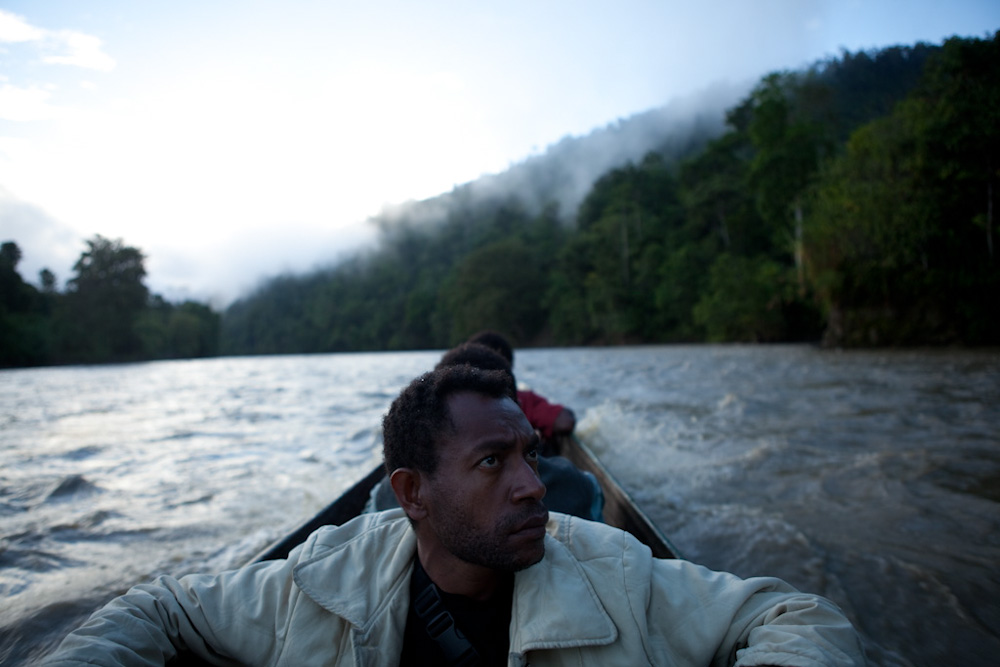 …Except it was the other way around; we stepped foot into a long (5+ meters) dug out canoe, equipped with an outboard motor, from the banks of the Markham River just outside of Lae, Papua New Guinea, on a sunny April morning, and continued to travel upstream, crossing into the mouth of the Watut River, the main focus of this journey.

Aboard this boat was Howard and Paul from Bismark Ramu Group (BRG), Charles, Gavin and me from the MPI, Sogo, Fuape, Ulricke and Stefan from the Lutheran Development Services, Reuben from the Union of Watut River Communities, and of course the two amazing skippers Jaing and Kikalem who managed to keep us upright the entire time.

So, with a photographer, some engineers, plumbers, community advocates, outreach workers, community representatives and a scientist, we began the

week-long journey up the Watut River. The purpose of this trip was to connect with Watut River communities who have been negatively impacted by mining. To listen to and record the stories of community members who are concerned or who have been impacted by the mining developments at the Hidden Valley (HV) gold mine, located at the very mouth of the Watut River in the Bulolo District. It was also to present and discuss complicated scientific information related to the HV mine and the associated tailings pond and the potential or existing impacts to the Watut River and surrounding villages.

Arriving in Chias on the first night, a village MPI and Reuben had visited a year earlier, we were welcomed with a meal of fresh yam, potatoes, cooked bananas, papaya, mango, coconuts, rice, chicken and pork, which was prepared by the women and girls of the community. Chias village and all of its houses sit on a bed of mud and silt; the village had to relocate from the banks of the Watut River after it was flooded with silt a few years ago. On higher ground, however, when it rains, everyone walks through mud to get to the kitchen, toilet, and to bed.

We were told stories of how villagers’ food gardens were also swamped with silt and how they lost important crops; they believe it is the result of sedimentation from the mining upstream at Hidden Valley, and, expectedly, this has had great impacts on their livelihoods. People are scared now, even to swim and wash in the river, although they still do, being part of tradition and lifestyle, even though the Lutheran Development Society installed a village water source (a tap with fresh water running from the mountains), which was funded by the Morobe Mining Joint Venture (MMJV) , in 2011. Though this has proven useful, villagers still prefer to use the river, as it also a source of fish, recreation, transport, and of the river-side markets that occur most days along the banks.

That night, and each night we stayed in villages following, we showed two documentaries by Scott Waide from BRG called Watut River Cries and The Ground Beneath Me, as well as a short film that I had put together from last year’s trip to the same area with MPI, which showed other community members and advocates speaking about the problems in the Watut River and with MMJV; it also showed members of their own community, which resulted in great laughter by the kids. We projected this up onto a sheet attached to the side of the local canteen, using a USB-powered projector the size of a point-and-shoot camera; which brought many kids and adults’ attention alike, being something that doesn’t happen regularly in Chias.

After the films there were presentations by Charles, Gavin, Reuben, Howard and Paul, who each explained why we were there and what we were doing. There was great interest and discussion following the presentations where people voiced their concerns about the impacts of the mine on their community and their experiences so far dealing with the mining company. These conversations often went on long into the night.

From Chias we travelled upstream to Uruf where we witnessed a beautiful Easter church service held in one of the few solid structures in the village; the church. There wasn’t enough room for everyone inside the church so people lent in through the windows and sat under the mango trees outside; at times I think that the whole village was singing together. We held a public meeting as well as interviews with those that wanted to speak on camera.

From there we travelled on to Magaring village where we stayed for two nights. Arriving at dusk to a near empty village as everyone was returning from Bible c

amp over the Easter holidays. We fell asleep early listening to a heavy rain come down overnight and we woke early the next day to travel up to Wafi Creek and Pekumbe village where we began our walk up to the Wafi-Golpu exploration camp and drilling sites. Wafi is a new MMJV  project which is planned to be ten times larger than Hidden Valley mine and could result in the relocation of many villagers in the area as well as threaten Wafi Creek and the Watut River with further erosion and sediment.

We walked up Wafi mountain, slipping and sliding up steep and muddy hills, crossing the waist-high river several times and sweating out any water we consumed. Of course our guides were fine, not phased by the mountain and heat, laughing quietly when I stopped and swore under my breathless breath.

Once up at the mining camp we could get an unbelievable perspective of the Wafi Valley and see some villages scattered below. The sounds of the forest’s cicadas around us occasionally interrupted by MMJV’s helicopters delivering supplies to the camp and drill rig; a drill rig which sat at the top of a steep peak with maybe twenty workers going about their business in what is an incredibly remote location. We surprised the Queensland based New Zealand worker when we popped up over the hill with our white faces and cameras.

Four hours later we made it back down to Pekumbe village where we held a big meeting and got great interest and discussion within the community, many of who work on the Wafi project. We were fed at the pastors house and sat exhausted on the wooden floor of the dugout back to Magaring where we were able to shower in the middle of the village and rest for a while before starting the evening’s discussions and film-screenings. People came from nearby communities that night, which made for a huge event.

Waking up to tropical rain hitting the thatched roofs and palms, the sounds of roosters crowing and of fires starting and the day beginning before dawn was an incredible privilege for us, who are used to the sounds of traffic, planes and neighbors that might never speak to one another; this everdayness, the preciousness of life, the strength of every action in the day is what I was trying to capture while filming there, that we want to highlight in a big way in the documentary we make.

In Magaring one morning, I met Faith, a high school girl, maybe 16, who, with her friends, took me and Ulricke through the garden forests pointing out each fruit and vegetable as we went, and, when we stopped, spoke about wanting to be educated so she could come and be a strong woman in this community, make decisions for this community around development and mining. “…If the mining or other people want to come and exploit them [the community], we can talk directly to them and tell them that they can’t lie and we will take a firm stand to bring change to our village. We don’t our villagers to be exploited but to be strong…” said Faith.

We left Magaring the next day and travelled back to Lae where some of us rested, showered and slept soundly. The next day we were picked up in a car and taken up into the Bulolo district, to the Middle Watut communities, where we wouldn’t have been able to reach on the dugout. We stayed in a community called Sambio and were welcomed by the children throwing flowers at us as we pulled up. Sambio is situated in a large valley, surrounded by big green mountains. This community had access to power lines, and had a few more installed water systems between the houses.

From Sambio we travelled to Kapin village where we had visited the year earlier. After a big meeting in the Church I was taken up into the steep hillside gardens to film the women working, and down to the river to film the women and children playing and panning for gold. We stayed in Sambio for three nights so were able to get to know people a bit and stay around the village to film the gardens and the daily goings-ons.

On the second last day we had a big meeting in Palengkwa, near to Bulolo town, where people have been fired up about MMJV for a while, being where Rueben Mete lives, there are lots of people interested and concerned about how mining is and will change the area.

The second last day of our journey we made the long awaited trip to the Hidden Valley mine; and this is where the story begins and ends, as the top of the Watut River starts its journey from the mountains where the HV mine lies, running right through the excavations and mining equipment, all the way to the Solomon Sea, feeding thousands of people along the way; a river that can’t be replaced.

In the coming months I will be working hard editing all the interviews and footage to make something that hopefully represents the strength and resilience of community members as well as the beauty of the Watut River region, and give an understanding of what people are hoping for in their lives and villages.

I hope I can do them justice.