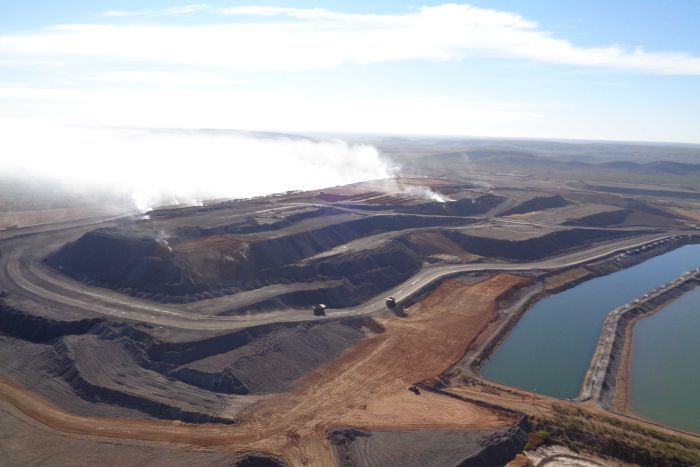 Indigenous residents in the Gulf of Carpentaria have taken what they hope will be a pre-emptive strike in the battle over whether the McArthur River Mine (MRM) will be allowed to continue expanding.

Photo: MRM said in 2015 it had extinguished the dump fire, but problems have resurfaced. (ABC News: Jane Bardon)
Two years ago, after rock on the zinc and lead mine’s waste dump started burning, Swiss mining giant Glencore was asked to lodge an environmental impact statement (EIS) proposal on how it intended to manage more than 0.5 billion tonnes of the reactive material.

With the Northern Territory and federal governments still waiting for that proposal, residents have commissioned an alternative plan they will publish on Monday.

The author of the report by the Minerals Policy Institute, a charity that campaigns for sustainable mining on behalf of affected communities, recommended the governments should stop the EIS process and hold a public inquiry into whether the mine can safely continue.

Dr Gavin Mudd said when at the end of 2013 the mine’s waste dump started spontaneously combusting, a plume of toxic sulphur dioxide smoke was very visible evidence of the NT and federal governments’ failure to properly assess the risks posed by the world’s biggest bulk producer of zinc-lead concentrate.

“I think we need to have a full and proper inquiry, and I think an EIS process doesn’t do that,” Dr Mudd said.

“There’s been a litany of mistakes in the history of MRM, its environmental assessment and approvals and a lot of the environmental risks have always been underestimated.

“We’ve underestimated issues such as tailings dam seepage, acid mine drainage things like combustion and getting to the fact that you’ve got smoke plumes emanating from waste rock dumps – that’s unheard of base metal mining,” he added.

After two EIS into the project, in 2005 and 2011, iron pyrite in the waste rock dump had started reacting with the air, and when it got wet during the monsoon season, the dump started leaching sulphuric acid, alkalies and metals.

Fish in McArthur River tributaries were found contaminated with lead.

Borroloola Garawa elder, Nancy McDinny, who lives on a small outstation near the mine, said she and other residents had sold their paintings to raise money to fund Dr Mudd’s report because they were worried about impacts on the McArthur River system.

“We’re not too sure to eat all them fish again and dugong and sea turtle that we always be eating, we don’t trust it any more,” she said.

Environmental campaigner Lauren Mellor who helped the residents organise for the report to be compiled said: “What we’ve got at MRM is a problem of a scale and a nature that we’ve never seen on an Australian mine site before.”

Dr Mudd also recommended that Glencore should not be allowed to go ahead with its current plan to leave the waste in an 11 kilometre-long hill along the McArthur River.

“I don’t think we can make a case that this sort of waste is going to be stable and safe above ground forever,” he said.

By May 2015 the company had almost doused the dump fire, and said it had the burning under control.

The NT Government allowed it to start building another section of its waste dump, the Central West dump, this year, but in July residents reported burning again.

The Mines Department went to investigate and confirmed that spontaneous combustion appeared to have started again on the northern section of the dump.

The department added “officials are concerned that reactive rock may have been placed on the Southern Overburden Emplacement Facility”.

The Mines Department has also told the ABC there are cracks in the surface of the northern dump and it was steaming in July when rain fell.

‘We don’t like that mine to be going ahead’

When iron pyrite reacts with water sulphuric acid is created, a substance that the mine’s Independent Monitor has already reported leaching through the site into the McArthur River system.

The company has said it is “co-operating fully with the department’s enquiries”.

“Community consultation has been underway for some nine months and will continue. We expect to lodge the EIS within the next six months,” he said.

Residents hope the governments will be influenced by their report.

“They have to listen, because we don’t like that mine to be going ahead,” Ms McDinny said.

Territory Mines Minister Dave Tollner said he had “paid a lot of attention to it”, but as the Government was in caretaker mode in the lead-up to the August 27 election he had “no ability to make decisions in relation to MRM”.