Gavin Mudd and Jessie Boylan from MPI traveled to Rockhampton, then on to Mount Morgan to document the famous Mount Morgan gold-copper mine, which generated not only extra-ordinary wealth for its major shareholders but has left Queensland and Australia with probably it’s largest and most polluting mining legacy.

Gold was first mined on a commercial scale in 1882 with bonanza grades of more than 100 grams per tonne – ie. more than three ounces per tonne of ore – which proved extremely profitable. These ore grades were several times typical gold mines of the time (such as Bendigo & Ballarat in Victoria). The original syndicate was re-formed in 1886 as a new company, the Mt Morgan Gold Mining Company, and large scale mining began. Two members of the original syndicate were Walter Hall and WIlliam Knox Darcy – both generating huge fortunes from their investment. Darcy soon shifted to the UK in 1889 and began to invest in a range of other ventures – the most important being oil exploration in (then) Persia from 1900 – and, despite nearly losing his fortune, struck black gold in 1908 and made another incredible fortune. The oil venture, called the Anglo-Persian Oil Company, was changed name to BP in 1954. Walter Hall had built his original fortune from horse coach company Cobb & Co from 1857, but as an initial investor in Mount Morgan, he reaped enormous fortunes along with other initial investors. Shortly after his passing in 1911, his wife, Eliza, used a considerable fraction of the Halls’ wealth to establish the Walter & Eliza Hall Institute for Medical Research – now a world renowned medical research centre.

By 1905, the gold ore was declining in grade and reserves were not as easily found and mined. However, beneath the gold ore cap of the famous ‘Ironstone Mountain’ was an even larger deposit of gold-copper ore. The wealth continued to flow and pollution problemsd remained ignored. In 1927 a major fire soared through the mine workings and the company went into liquidation … but in 1933, after some years of study and a much stronger copper market, the mine was re-opened as a large scale open cut mine and stayed in production until 1982 when the famous mine was finally depleted. Tailings were then reprocessed for to extract residual gold until 1990, at which time the Queensland Government took over ownership and responsibility for the site – by then an infamous site of massive environmental pollution in the Dee River.

By 1982, total ore processed was about 56 million tonnes grading about 5 grams per tonne of gold and about 0.85% copper, with minor amounts of silver. In addition, about 100 million tonnes of waste rock was also mined. Final production is estimated to be about 242,578 kilograms of gold (ie. about 7.8 million ounces of gold) and about 374,000 tonnes of copper.

The environmental pollution is caused by acid and metalliferous drainage or ‘AMD’ – also known as acid mine drainage. AMD is generated when sulfidic rocks, such as pyrite (ie. iron sulfide), are exposed to water and oxygen in the surface environment rather than being isolated as crystalline rock underground. Above ground in the surface environment, the sulfides react with water and oxygen to form sulfuric acid – which in turn dissolves extreme concentrations of salts and metals, including potentially copper, arsenic, nickel, cadmium, zinc, aluminium, iron and many more. AMD is a deadly toxic soup to aquatic ecosystems and biodiversity. Downstream in the Dee River, the AMD has devastated the aquatic ecosystem for tens of kilometres and left it stained and heavily polluted – severely impacting not only on the environment but also human uses of the Dee River.

In the past decade, some works have been undertaken to try and reduce the pollution, such as seepage interception from leaking waste rock dumps and a water treatment plant to treat the highly acidic water which had accumulated in the former open cut – just a mere ten billion litres or so … (ie. 10 GL or 10 million cubic metres). Although these works have helped to partially reduce the pollution burdens from the former Mount Morgan mine to the Dee River, as our photo’s below show, the pollution burden remains intense and there is a long way to go to restore the Dee River to normal health.

During our visit, several locals expressed a clear view that they wanted the Dee River cleaned up – but recognised it would cost alot of money …

The Mount Morgan mine is a ‘classic’ legacy site – generating enormous wealth in its heyday but leaving an environmental disaster, which will cost current taxpayers hundreds of millions of dollars.

In January this year, a large storm hit the region and the pit filled up and over-flowed for the first time, sending huge AMD-rich waters further down the Dee River than ever before. Locals felt this was the worst impact yet from the Mt Morgan mine, a timely reminder of the need to urgent remediate the site.

You can see a short video Jessie made about Mount Morgan, as well as photographs from the trip on the mining legacies website. 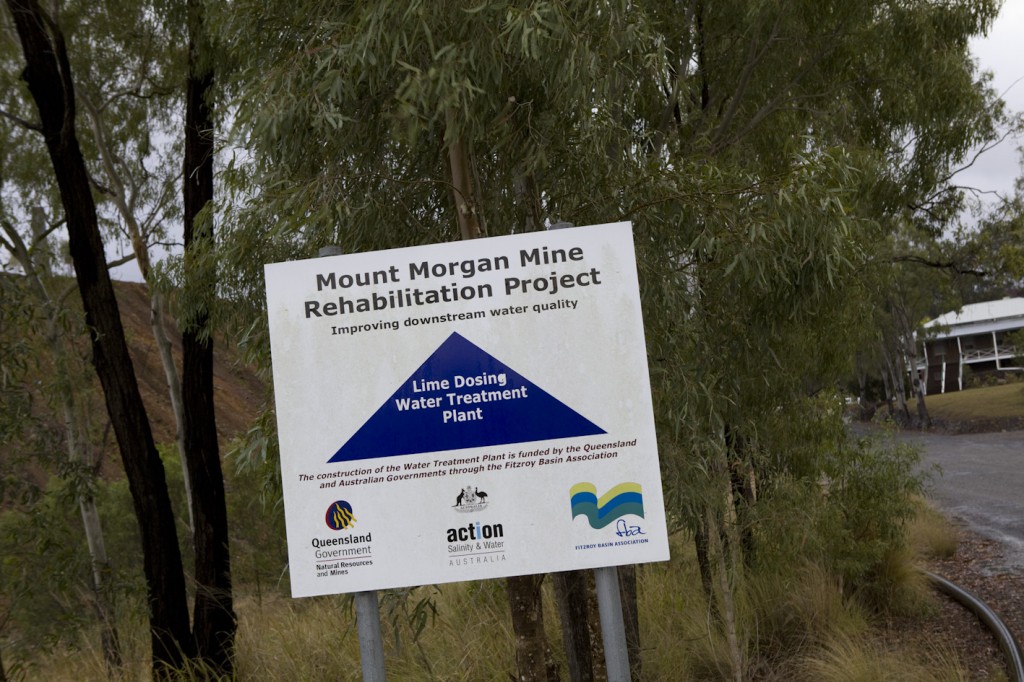