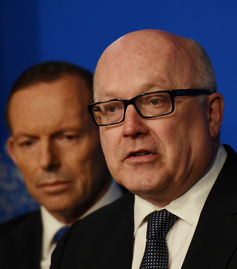 The federal Liberal Party, government ministers, Coalition MPs, the Minerals Council of Australia and the Institute of Public Affairs (IPA) are targeting the advocacy role of Australia’s environmental NGOs. In particular, they are trying to silence debate on climate change. The attacks are significant, they appear to be concerted and they are intimidating.

Under the Howard government, a ten-year campaign of attacks tried to “silence” non-government organisations. An IPA and government narrative sought to change Australia’s long-held idea of democracy – one in which many voices join in public debate. Instead, they spoke of democracy as a market in which NGOs “interfered”.

Twelve months into the Abbott government, conservative forces, both in government and outside, are mounting a new push. It is the same ideology as before and it affects the whole NGO sector. But it is also more focused on silencing climate change debate and protecting corporations that are responsible for emissions and unsustainable practices.

Tracking the campaign against NGOs

The attacks on NGOs have intensified in recent months. Their timing suggests they are not random events.

Charitable advocacy belongs in a democracy

Advocacy and lobbying activities are not unlawful or inconsistent with being a charity. The High Court has supported this argument. Protection of the environment is soundly based in charitable law.

Campaigns directed against companies in order to protect the environment are not like union or industrial boycotts. It was a Coalition government that last protected environmental and consumer campaigns from the requirements of Section 45D. Despite Minerals Council claims, legal experts say Section 1041E of the Corporations Act would be hard to apply to the work of NGOs.

Australia’s democracy is not a market. NGOs allow the average citizen to have a voice, they call governments and businesses to account, they suggest policy that has a longer time frame than the next election, and their ideas enrich debate on public policy. The climate change and sustainability debate in Australia needs them.

Read the other articles in The Conversation’s Remaking Australia series here.

Joan Staples holds the honorary position of Vice-President, Environment Victoria. She does not work for, consult to, own shares in or receive funding from any company or organisation that would benefit from this article.

This article was originally published on The Conversation.
Read the original article.