State Crime – on the Margins of Empire, RIO Tinto, the War on Bougainville and Resistance to mining 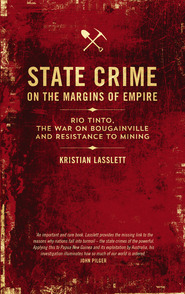 Dr Lasslett, a criminology academic from the University of Ulster, has provided a new and thought provoking analysis of mining and the Bougainville War in State Crime – on the Margins of Empire, subtitled, Rio Tinto, the War on Bougainville and Resistance to Mining. While both themes are valuable to those interested in either state crime or Bougainville, it is the connection between the two, supported by new and original data sources, that brings the theory alive and applies a novel approach to examining the contributing stresses and causes of the Bougainville rebellion.

Readers more familiar with mining and/or interested in Bougainville might prefer to start with chapters two (p.28) through to six that focus primarily on Papua New Guinea and Bougainville, before coming back to Marx and Capital which Laslett introduces to in the very first sentence. While starting with the theory of state crime and the empire of capital may be challenging for those outside the field, Laslett manages to present a fairly brief overview of how the interactions of state, market and empire in Melanesia resulted in state crime on the margins of empire.

Building on a concise history, Lasslett discusses the trajectory and impact of PNG capitalist development at the hands of England, Germany and Australia. Describing a process of ‘neotribalisation’, which reinforced the tribal nature of PNG society and produced a ‘very different form of democracy’ than was envisaged by the colonial administrators, perhaps caused by the difference between the bicameral system based on political party alliances as in Australia or England; and PNG with it’s unicameral parliament and the ever-changing tribally divided politics. The result was a political system that has little capacity to check the growing abuses of patronage that have grown out of the traditional wantok system of reciprocity. This, according to Lasslett, has lead to a process whereby marginal interests have disproportionate influence over government policy and natural resource development, with governments seeking to impose conditions that suit the market. The end result has been the poor delivery of services and an unshakeable belief that large scale transnational delivered resource extraction is the only viable option for fiscal dependence.

Panguna was, in some ways, seen as the solution to PNG’s need for development – as long as development was defines by a classical liberalism and the free market definition, rather than small scale locally controlled development. The answer was Panguna, a large-scale project by international standards containing almost one billion tonnes of ore. Some 40-50 years later, the industry is acutely aware that bringing large-scale accelerated development to largely subsistence communities is fraught with danger, if not doomed to failure. At the time, however, the impacts and implications from the fracturing of community, the destruction of the environment and radical changes to the Island’s political economy were either underestimated or ignored. In Bougainville this resulted in flow-on impacts from environmental disturbance; overburden and mine waste; and increased social tension between those able to capitalize on mining’s economic benefits and those who could not.

In Chapter Three, from landowner crisis to industrial sabotage, Lasslett examines Bougainville Copper Limited’s (BCL) response to the social rupture caused by and surrounding the mine, in terms of temperament, structure, institutional culture and class. Ironically, or perhaps perpetually, one of the pressures on BCL was the falling and low copper price. Ironic in the sense that the mining industry today, is once again shedding social and environmental staff and programs as it seeks to drive down costs and increase profits with the subsequent and predictable tensions, that arise from such a strategy, evident around the world. The struggle for control and evolution of the Panguna Landowners Association (PLA) makes for interesting reading as BCL and the PNG state try to respond to a rapidly deteriorating situation, bereft of the cultural understanding, governance and communication skills that could have ameliorated rather than exacerbated the rising tensions on Bougainville.

The middle section presents a detailed account of the events leading up to the shutdown of the mine, the ensuing troubles and finally the civil war and military blockade that caused the death of 16000-2000 people. For some readers it will be a familiar story, albeit supported with new primary sources that Lasslett interviewed as research for the book and the PhD that underpins it. For those unfamiliar with the war on Bougainville, how it was fought, the intentional brutality and the deliberate targeting of civilians via the military blockade, it will be a shocking story.

The complicity, in what Lasslett accurately describes as a state and corporate crime, of the PNG Government together with representatives of BCL and parent company Rio Tinto are laid bare. The active political, military and economic role of the Australian Government is one Australians, including the then Prime Minister Bob Hawke, might prefer to forget. Unfortunately, Bougainvillians do not have the same luxury as they try to come to terms with impact of the war and respond to the aggressive push to reopen Panguna.

Chapter seven, State crime and really existing capitalism: the lessons of Bougainville, re-examines the events in previous chapters through the criminological lens. Providing evidence “…that a highly coordinated, international campaign of state violence was organized by the PNG state, in collaboration with their Australian counterparts and BCL.” While evidence of war-time atrocities is always shocking, perhaps more shocking, is the documentation of Australia’s complicity in a war they have conveniently forgot, even as the current Australian government actively supports the re-opening of the Panguna mine.

In the afterward, Lasslett identifes a number of PNG commentators and academics, among them Dorney, Callick, Ona and Regan. While acknowledging their experience, knowledge, and earned respect, Lasslett disagrees with them on key facts, seeing the as them as critical of the BRA and very much pro the BCL and accepting, if not supporting the neo-liberal extractive agenda that many see as the only option for Bougainville to ‘develop’ and achieve independence. It would be interesting if they responded to Lasslett’s book, allowing readers to hear the reasoning behind their views and to make up their own minds.

Lasslett presents an interesting and challenging view of the role and impacts of mining on the Bougainville Crisis, a view at odds with some academics, and the pro-mining and investment media that dominates mainstream coverage in Australia, PNG and Bougainville.  Hopefully by continuing to examine the events of Bougainville, we can avoid the looming disaster of a rush back to dependency on large scale mining. The Bougainville Crisis’ had lessons for all of PNG and the mining industry, perhaps Bougainville needs to examine the impact of post Panguna mines (Ok Tedi, Porgera, Misima) before it rushes back to the past.

But the last word should go to Lasslett, who cites the research behind Jubilee Australia’s 2014 report, Voices of Bougainville in making this statement;

“…while quite triumphant overtures are being made with respect to the mine reopening, simmering in the background, is enduring discontent over injustices and grievances associated with the war. These are explicitly articulated by community members… [who] …demonstrate a strong desire to pursue an alternative model of development, which gives communities a greater sense of self reliance, stability, security and sustainability.”