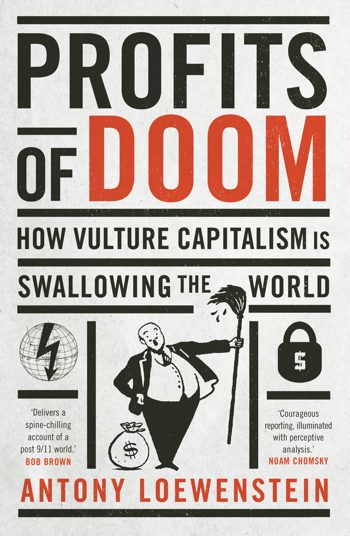 Prolific author, blogger and commentator Antony Lowestein has targeted disaster capitalism in his new book, Profits of Doom.  It’s an ambitious book seeking to not only build on Noami Klein’s work from the The Shock Doctrine but to ‘generate a global debate’. A wide ranging text; part philosophy, part travelogue, built on a frank and unrelenting account of disaster capitalism as it applies to the resource sector, war, environmental catastrophes, foreign aid and detention centres. While only time will tell wether it achieves it’s ambition, it does provide a valuable insight into mining in Australian and Papua New Guinea [PNG] – two of the Mineral Policy Institute’s favourite subjects.

The PNG chapter, entitled Papua New Guinea – the resource curse, roams from Panguna to Ramu Nickel to the PNG LNG terminal near Port Morseby. Along the way it discusses the effectiveness of Australian Aid in PNG, the social and environmental impact of mining, attitudes to Australia, the Bougainville crisis and much more.  Supported by interviews and numerous [footnoted] media accounts, Lowenstein delivers a personal narrative account of people impacted by the resource industry or working to reduce it, mixed with his own opinion on the impact of the resource curse in PNG.

Along the way we meet a number of people and either hear from them directly or via Anthony’s own words.  Willy from Bougainville has a ‘faint hope that Australia will start thinking beyond money and mining’. Rosa Koin, from our friends at BRG, is critical of Australian aid, rejects mining and believes in empowered communities feeding themselves.  Frank tells a short, but confronting story on what happens when families lose ownership of land and access to fishing.

While Lowenstein is not a extractives or PNG specialist, his work in other areas, including in this book, offer a valuable insight into the impact of the Australian Government and mining industry in PNG. While hard to choose, these concluding quotes go the heart of the problem and echo perspectives from our recent Hidden Valley documentary.

On economics …. “Nations with vested interest in PNG don’t overly care about its economic system as long as they can perform their resource extraction effectively…”

On PNG’s future… “What needed in PNG is a new model of investment, one that doesn’t treat the country’s natural wealth as jewels to be admired then taken. [and later] PNG shouldn’t be condemned to remain a land that offers little to locals and much to Western shareholders. Twenty-first century independence is possible”

Whether you share Lowenstein’s views or not, you will be confronted and challenged by the impact of [disaster] capitalism on the ground.