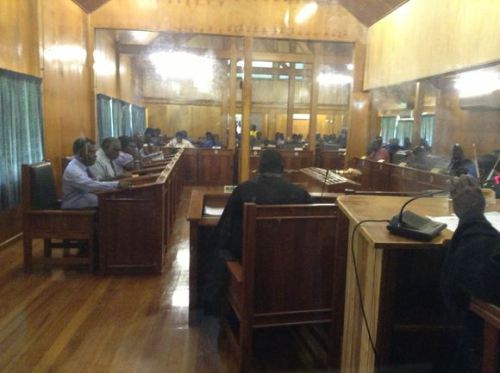 The Autonomous Bougainville Government is debating the new Bougainville Mining (Transitional Arrangements) Bill 2014 this week with a vote expected on Friday 8th August.

Until the bill was made available this morning  via the PNG Mine watch website, most people had yet to see the bill, indeed most Bouganvillians have still yet to see it and are unlikely to, despite the bill’s importance to Bougainville’s troubled past and future.

Despite the lack of consultation with the people, Bougainville Copper limited (BCL) was provided with a copy of the draft bill some six weeks ago, with a press release released on the 25th June 2014 noting it “may adversely impacts on mining rights held by BCL”.

Many Bougainvillians and commentators would say BCL lost those rights a long time ago when problems with the BCL owned Panguna mine sparked the Bougainville Conflict which caused the deaths of 10-20000 people.

There is a real sense that the bill is being rushed through to support the ABG’s Governments’s independence ambitions and the interests of transnational corporations (BCL is a Rio Tinto subsidiary) long before the people of Bougainville are ready.

According to PNG Mine Watch this bill effectively approves BCL’s claim.  “Under the proposed law, the ONLY enforceable right landowners have is to withhold consent for the grant of an exploration licence. After an exploration licence has been granted the ABG can over-rule their wishes at all stages of the process.

So under the transitional arrangements Rio Tinto will see its lease convert AUTOMATICALLY into an exploration licence, whether the landowners like it or not. Rio Tinto has, in other words, been allowed to circumvent the one enforceable power landowners have.”

Hopefully common sense will prevail and a thorough public consultation phase will be conducted prior to any vote.