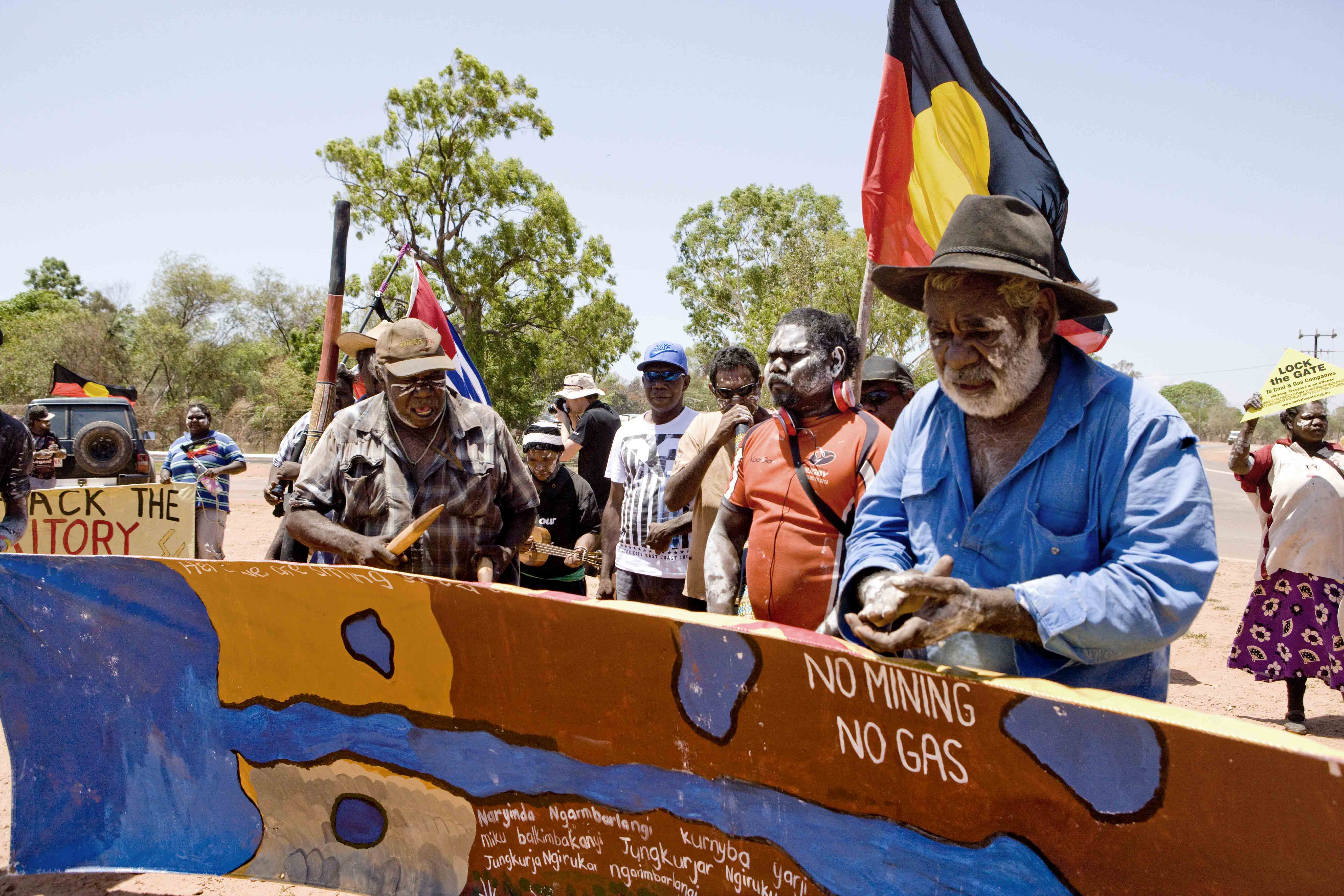 Panic has set in for the global resource sector with a sharp commodities slump bringing some of the world’s biggest mining companies to the brink of financial collapse.

In Australia, Glencore, one of the world’s largest and fastest growing diversified commodity traders, has been hit hardest of all. While the company is racing to assure investors they can ride out the ructions in global commodity markets, behind the scenes the unsustainable growth scenario Glencore relied on to reach the top of the resource heap means it is now skating close to bankruptcy.

Four years ago Glencore was valued at US$60 billion, but its capitalization now stands at around $16 billion. It’s a disastrous position for a mining giant carrying debts in excess of $50 billion, with markets predicting a credit rating downgrade to “junk status” and the likelihood of default sometime in the next few years. 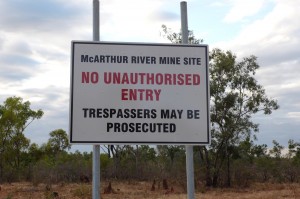 State and Territory government’s failure to insist Glencore operate in compliance with tax, mining and environmental protection laws may mean those communities on the frontlines of the company’s extraction activity will be left counting the costs of a resource boom gone bust.

Given that the company employs thousands of people and has prospective mine rehabilitation costs running into the billions, Glencore’s situation should be a matter of concern for every Australian. Companies like Glencore have been allowed to rapidly raise private capital by socializing their financial and environmental costs, and even abetted by governments eager to share in the short term profits while turning a blind eye to the mounting long-term impacts.

Glencore’s McArthur River Mine, located in the Northern Territory, Australia, is the largest open-cut lead and zinc mine in the world. From its earliest days, the mine has been the beneficiary of extraordinary government largesse, granted at the expense of the region’s Gurdanji, Garawa, Yanyuwa, and Mara peoples. The remote pastoral and fishing community of Borroloola, home to the four clan groups, is situated just 50 kilometers downstream from the mine.

With NT government support, in 1979 the lands on which the mine operates were exempted from the Aboriginal Land Rights Act (NT), preventing the site’s Aboriginal custodians from vetoing invasive mining or making a legal bid from its return.

In 2007, corporate lobbying efforts to convert the mine from an underground operation to an open-pit one succeeded against good science, community opposition, and a successful Supreme Court challenge by local clan groups. The expansion required the diversion of a 5.5 kilometer stretch of the McArthur River, resulting in a wave of local Aboriginal resistance and site blockades to stop the destruction of the river.

At the time it was revealed that despite a decade of operation the mine had never paid a single royalty dollar to the NT Government. Regardless of the absence of a strong environmental or economic case, the Martin Labor government barreled forward with the project by overturning the Supreme Court finding in favour of the community in a midnight sitting of Parliament, quelling protests with force, and retroactively applying laws to prevent further court challenges to its operation.

In 2013 the Northern Territory government again ignored advice from its own regulatory departments about a management culture at McArthur River Mine of recurrent operational breaches and the risk of a tailings dam failure resulting in major heavy metal contamination of local waterways. Its Phase 3 expansion plan, which would more than double its mineable reserves from 53 million tonnes (Mt) to 115 Mt, and extend the life of the mine from 2027 to 2036, was approved with minimal conditions.

But before work could get underway McArthur River Mine hit the headlines again in 2014 when a sulfur dioxide smoke plume emanating from the mine’s massive waste dump became public after rock began spontaneously combusting at the site. The toxic fires burned for over twelve months, with smoke plumes visible more than 30 km downwind of the site. The government predictably attempted to play down the scale of the problem, with the company permitted to cover the reactive rock with a thin layer of clay capping, later found to fail compaction tests, and operations at the site continued as normal.

Fast forward a year and further evidence has emerged of McArthur River Mine’s deep structural, environmental and economic problems. A government appointed Independent Monitor confirmed heavy metal contamination of local waterways and fish was caused by mine-derived lead downstream of the mine’s leaking tailings dam. Residents were left unable to rely on their regular diet of fish from the river due to lead levels found to exceed safe eating standards, and hundreds of cattle with access to poisoned waterways were culled. 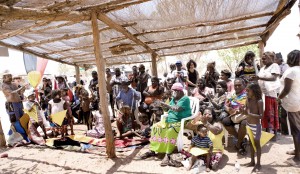 Freedom of Information documents obtained on behalf of local clan groups in June 2015 showed that the NT Government ignored advice on the mounting environmental liability and public health risks posed by the mine’s operations and took no action to prosecute Glencore for its numerous operational breaches.

During a recent round of emergency rehabilitation negotiations the NT Chief Minister appeared to be offering Glencore concessions due to the ‘structural difficulties’ the miner faced, citing the jobs vs environment mantra that had for a decade prior fuelled the mine’s unsustainable expansion.

“We won’t be sacrificed.”

In the face of company and government regulatory intransigence Aboriginal custodians are taking back responsibility for environmental and cultural management within and downstream of the mineral lease area.

As the campaign intensifies the company is threatening to withdraw vital services from the community such as health and education programs which, in the absence of secure public funding for many remote Aboriginal communities, have been made reliant on coercive mining sponsorship funds.

Gadrian Hoosan, a young Garawa man, has led protest actions to reclaim and occupy damaged sacred sites inside the mineral lease, and to highlight what he sees as NT government complicity in allowing Glencore and other big miners to treat their lands as sacrifice zones for the pursuit of profit. Hoosan said: “Nearly 100 years ago our old people fought miners with spears for encroaching on our land to open Redbank copper mine. Mining went ahead, and now that river runs dead for 40 km across the NT border and into Queensland. Today the young people who have witnessed that damage are fighting in the same tradition, but today we fight alongside each other – black and white and all clans for our future. The government doesn’t respect us, they just try to divide us to get the yes they need for mining to go ahead… The Northern Territory government needs to stop selling our land off from under our feet. Get out and listen to the people living next to and downstream of the mining pits.”

Under pressure and faced with mounting threats to disrupt mining activity, an agreement between the NT government and Glencore was reached to increase the rehabilitation bond. But laws designed to protect corporates from financial scrutiny allow rehabilitation liabilities to be hidden in commercial-in-confidence clauses, with the public left exposed to multi-billion dollar debts and unable to determine if mining meets the test of a cost/benefit analysis.

As Glencore’s crisis unfolds, the company will move to cut costs and shed jobs. For communities like Borroloola, which have born all of the costs and seen little of the benefits of the resource boom, it is vital to ensure that the dispossession caused by mining is not repeated in the coming crash.

Building strategic partnerships with labour unions and environmentalists, local clan groups are fighting to guarantee that every single local job is retained—not for mining, but for the urgent task of site clean up, and to bring new opportunities to the community for well-paid, skilled livelihoods in a clean environment that can redress decades of government neglect in housing and other critical areas.

Environmental justice campaigns like the McArthur River mine battle are propelled by a growing recognition that the social conditions of our communities are inextricably tied to the health of the natural environment. Old dynamics of resource extraction and accumulation based on dispossession, where resources are appropriated and privatized alongside the exploitation of local communities, are now being challenged on an unprecedented scale.

The McArthur River Mine case highlights the failure of the economic development paradigm in which State and Territory governments’ insist that remote Indigenous development must be based on natural resource extraction or communities face the threat of service deprivation or closure.

Instead of looking to bail out resource giants who have hit the inevitable limits to growth, we should be embracing the bold new global movement emerging from Indigenous communities like Borroloola to challenge the economic logic of extraction. It’s just such a movement that can help us re-learn the true value of clean and healthy land, water, and communities.

The article was first publish in the Mining Monitor Vol.5 November 2015