Since fossicking through war debris when she was a child living on Manus Island as the daughter of a Royal Australian Navy doctor, Isla MacGregor has since carried with her a deep interest in geology and minerals.

Originally from Scotland, the MacGregor family came to Australia in the post-war period of mass-migration and landed in South Australia. Upon deciding that the ongoing pollution of the Murray River was getting too appalling to live with, Isla moved to the green state of Tasmania in the late 1970s as an environmental refugee. 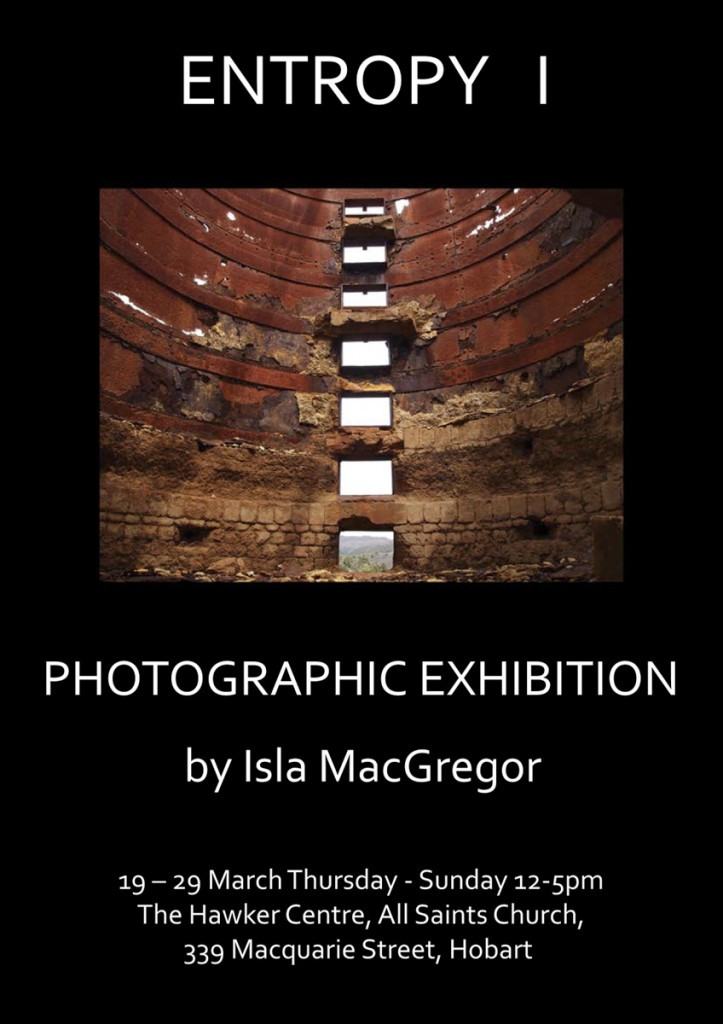 Interested in drinking better water and living in a climate that was better for growing food, Isla moved to Rosebury on the West Coast. Her initial time there was spent riding her motorbike around the old mine sites and “checking them out”. Since then Isla has been a keen ecologist, geologist, gardener, artist and public health advocate for people affected by mining.

MacGregor’s exhibition of photographs called Entropy explores the “conflicted zone between the romanticised imagery of artists and historians, the deep connection to place felt by mining folk, and the severe degradation of the environment that follows mining activity. The evocative images of the roaster at The Tasmanian Smelters at Zeehan, set against the flayed hills, are nostalgic reminders of the hardships endured by many early mining families on the west coast.”

This is a conversation between MPI’s Jessie Boylan and Isla MacGregor about the issues that are explored in Entropy for this edition of the Mining Monitor.

JB: Your exhibition Entropy is coming up at the Hawker Centre in Hobart in March, could you tell us a little about the work, what your photographs are of, and what issues they are raising?

IM: The inspiration for these photographs I’ve used in my exhibition largely stemmed from a couple of things that happened last year, the mine legacy sites tour with Gavin Mudd [and others] in Zeehan, and also because of my previous work on the impacts of historical mines in Tasmania, particularly on Tasmanian waterways, [my work] on contaminated land [and] the contamination on the landscape.

I’ve been a volunteer with a couple of organisations, including the Tasmanian Public and Environmental Health Network up until last year and the focus of my work there was mining and contaminated waterways.

So I think the inspiration also comes from the absolutely astonishing environment that many of these mines exist in. Also, I think there is a major challenge for people who are artists and writers, historians in particular, to actually tell the truth about the history of degradation and contamination from mining in Tasmania. This is not something that we’ve seen.

So the dominant imagery that is projected from Tasmania about our landscape is the ‘wilderness imagery product’, and this only tells half the story, if that, about what has happened since the European Invasion of this island.

JB: So how does your work actually to talk to these issues?

IM: Through the medium of photography, and I’m not talking about just documentary photography, there’s a high-level of what you would call ‘aesthetic engagement’ for me as a photographer with the mining landscapes. There are some astonishing images in terms of beautiful colours, raw juxtapositions between the human-made world and the natural environment.

IM: What the tourism product does with wilderness photography is it excites people to come to see and experience this very vibrant sensual landscape that we have here. This ‘wildness’ – I don’t refer to it as ‘wilderness’ because I don’t agree with that concept as such, but it is a wild place, and there are reasons why I don’t agree with that concept which you would understand in relation to indigenous issues.

I think that it’s really important when resource extraction is something that we are constantly having to deal with in terms of development applications to government, whether it’s for newer big mines in Tasmania, it’s expansion of existing mines, it’s mines that have recently opened up like Nelson Bay and then been closed because of market fluctuations or whatever.

Also the additional problem is that we’re at a time, politically since self-regulation burst upon the political landscape in Australia in the 1980s, where the capacity for government agencies to regulate is virtually negligible now. Self-regulation is a really problematic issue when it comes to mining companies conduct and lack of ethics, in terms of how they deal with these issues.

We know from experience, from my work with the Tasmanian Public and Environmental Health Network, that mining companies are not being ethical in terms of compliance with mine license agreements, environmental protection notices… We’ve done that community based auditing of that process and they’re not coming up squeaky clean at all, and there is no political will from any side of government, with exception from minor parties or independents to bring back this concept that there are some aspects of big government that we must have back and we must regain control of.

JB: You mentioned before that people aren’t really being honest about what the images are that are coming out of Tasmania, but we do see a lot of environmental photography and work related to logging and deforestation in Tasmania, and there has been a lot from groups like The Wilderness Society for example, and a lot of films about clearfelling; I wonder how do your mining-landscapes imagery differ from this kind of work, because I’ve been looking at them and I’m very intrigued about the way that you are using your camera to tell this story?

IM: Well this is very important because is my photography is challenging the mainstream non-governmental environmental organisations here to take a bigger picture look at what’s going on with this landscape, and I’m challenging them also by saying “what is it about your policy agenda that stops at Mount Arrowsmith? – Mt. Arrowsmith is where the major geology of Tasmania changes and it’s an area just west of the Cradle Mountain/Lake St. Claire reserve, it’s still part of the world heritage area. Once you get into the west coast and you get into these historical mining areas, the general understanding that I have is that people, including many environmentalists, [is that] mines [are] just shut down, there’s like an iron curtain over the mining areas, and it’s sort of a fait accompli, it’s been, it’s done and that’s the end of it, except when it comes to forests.

Most of the forestry actions have occurred in areas where people are living in communities on the borders of agricultural zones. So whether it’s the Southern Forests area or the Jackeys Marsh area, or it’s the North West area near the North-Western rainforest, you’ve got people who’ve gone and lived there, whether they’re farmers or whether they’re people who want to have an alternative life-style, so they’ve got a real interest, but in areas where there is mining there isn’t a large population of people living [there]. So there are multiple reasons why people don’t generally concern themselves with these things, other than the fact that you’ve got your tourist icon areas, which people just focus on, and we know that they are exploited for their tourism potential, and these are still some quite wild areas. But on the whole there is a vast area in western Tasmania that is still open to mining.

JB: So your images are focused mainly in the Western Areas?

IM: My images are all taken in the western area, like Zeehan, with the exception of one in Queenstown. That site would have to be the most toxic, contaminated site from mining in the state.

JB: I was looking at your images, and I love the way in which you have abstractified the landscapes with man-made objects, as well as abstractified the impacts of mining in what looks like water sources, but could very well be a large aerial photograph- I wonder if you could talk a little about your aesthetic decisions when you’re making these images and how that speaks to your deep political and environmental agenda?

There’s multiple layers of degradation going on here, of disorder […] so in that sense the concept of entropy, the state of disorder, you also have the fact that even within this structure that is disintegrating there is order being created, and that’s the source minerals from which the mining started from.

There were 111 lead mines in the Zeehan area…by the 1960s the mines had closed down. Up until about 1920, the last of the major mines had been mined out.

JB: Ok, I’m going to go back to the beginning a bit: when/how did you become interested in mining issues and when did you start photographing sites?

IM: I used to be an artist, a painter, as a young person, and I’ve had a long-term interest in mineralogy and geomorphology because I’m also a gardener – I grow food, and one of the inspirations for geomorphology is, and of course being an ecologist, you want to understand where you can grow food, why you can grow food there, why the trees grow here and not there, where things happen why they do, but they don’t two kilometers away, because the geology changes – so it’s an essential part of being a geologist, understanding geomorphology, and an essential part of being an environmentalist, because you’re wanting to understand how to preserve and maintain some sense of sustainability for your communities, so it’s a very big-picture sweep really.

I’ve been doing photography on and off since the mid 1980s, I did win an award back in 1986 for colour photography, when I did live in the west of the state. It was a feminist piece, it wasn’t a pretty sunset or a landscape. I am a feminist, a radical feminist, so that’s why I feel that the issues of mining and social justice cannot be separated, particularly when you’re looking at Indigenous communities or the vulnerability of women and children.

JB: What are your plans once the exhibition finishes in Hobart?

IM: I hope to take the exhibition to schools, as well as the 2017 Queenstown Arts Festival, and I have already had interest from another Hobart Gallery.

I also want to do a documentary on contaminated waterways in Tasmania, which we will need to get funding for. The island state of Tasmania has over 4,000 mine sites. There are 682 abandoned mines, 215 of which are polluting over 75 waterways known to be contaminated with acid mine drainage and some with a noxious cocktail of heavy metals, 6 major estuaries are contaminated, including the Derwent, which Hobart sits on, – they are a poisonous legacy for future generations.

When you have a think about it, it’s a big issue that nobody’s talking about, nobody’s showing. So it’s really about knowing the imagery […] I know the areas and I know how to see things.

The thing about the work that I’ve done is I’m showing people how to look. So when you’re passing through look closer, look closer.

RIO Tinto, the war on Bougainville and resistance to mining

Rudd’s hard-line approach will be disastrous