­Ranger uranium mine operates within the bounds of the dual World Heritage listed Kakadu National Park. Ranger was established through a no-consent lease on the traditional lands of the Mirarr people in the late 1970s. Ranger is the only operating asset of mining company Energy Resources of Australia (ERA). ERA is 68% owned by multinational mining giant Rio Tinto.

No other mine in Australia today holds the status and notorious operating record of Ranger mine, surrounded as it is by our largest and World Heritage listed national park. Kakadu is a site of significance for its rich cultural history. It is home to over 60,000 years of living Aboriginal culture and is host to a unique ecosystem sustaining species of flora and fauna found nowhere else.

After 30 years of accidents, spills and security breaches the nightmare for this incredible place may soon be over as ERAs plans for expansion have been put on ice.

In 2013 Energy Resources of Australia announced its intention to seek approval to mine a 34,000 tonne uranium resource, Ranger 3 Deeps, and began construction of an exploratory tunnel that would allow underground access to the deposit.

The Ranger 3 Deeps proposal was ERA’s only viable plan for continued mining at the site after Ranger’s reserves had been exhausted, but on June 11 Energy Resources of Australia shocked the ASX by announcing it would not proceed to the project’s Final Feasibility stage due to economic uncertainty.

Mining at Ranger’s open pit ceased over two years ago and production is currently sustained by processing stockpiles. All mining and mineral processing at the site must end in January 2021, to be followed by a mandated five-year rehabilitation period whereby the Ranger Project Area must be rehabilitated to a standard acceptable for inclusion into surrounding Kakadu National Park.

Costs and corporate responsibility for rehabilitation

Critical to this decision was Rio Tinto’s withdrawal of support for the proposed underground mine, saying in a statement it would not support any future mining at the site.

ERA’s capacity – and Rio Tinto’s commitment – to meet the site’s rehabilitation requirements has been under a cloud since 2010 when ERA began posting successive pre-tax losses which now total $981 million. Following the June decision to abandon further work on the Ranger 3 Deeps proposal ERA has lost a further 73% of its share value.

A combination of depressed uranium prices in the wake of the Fukushima nuclear accident, global market oversupply and two six-month long forced closures at Ranger mine due to mismanagement including a major radioactive spill in December 2013 have left the company with less than $300 million operating cashflow. At present the Commonwealth holds just 10% of the rehabilitation bond as security and an undisclosed sum of cash bonds.

In 2013 ERA’s Chief Executive warned that the company may request a public bailout to secure rehabilitation funds if the mine was unable to return to profitability within its operational life. 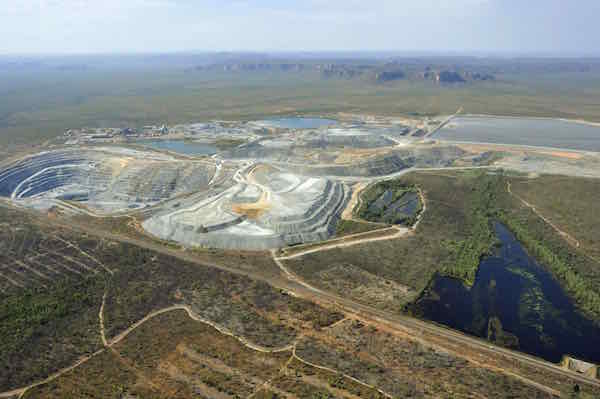 Until recent developments Rio Tinto, which is worth an estimated $100 billion, had attempted to publicly distance itself from responsibility for rehabilitation, deflecting criticism by downplaying corporate ties.

At its 2014 Annual Meeting, however, Rio Chief Executive Sam Walsh claimed: “ERA is a separate public company, and the board of directors will be responsible for the affairs of that company”. Walsh then further distanced himself and tried to limit Rio Tinto’s responsibility by saying “If Ranger 3 Deeps didn’t proceed, there is an issue for the ERA board.”

In the intervening twelve months Mirarr Traditional Owners and environmentalists maintained the pressure on Rio, calling for assurances that the costly and complex task of rehabilitation would not be compromised and the parent company would not walk away from its responsibilities in Kakadu. At Rio’s 2015 London Annual Meeting Chair Jan du Plessis appeared to change tack, suggesting the multinational miner was concerned its reputation may be at stake: “We absolutely appreciate the need to take care of that site and to make sure it is properly rehabilitated and that it is restored in the way that people would expect from this company. I can assure you today however that should the board of ERA should at any point call a rights issue to get further capital into the company, we will follow our rights as shareholders to put further capital into the company so that they can meet their obligations.”

Rio also confirmed an offer of a “conditional credit facility” should existing or future cash reserves fail to cover the required rehabilitation effort. At the time of writing it is not clear that ERA has accepted this condition and abandoned consideration of options for further mining. The shock defection of half ERA’s Board members including Chairman Peter McMahon and independent non-executive directors Helen Garnett and David Smith appears to have resolved a lingering internal tension over which option the company would pursue – a lease extension or the beginning of remediation.

So after 30 years of uncertainty the question remains, will ERA accept Rio Tinto’s life-line in the form of a conditional credit facility or will it be forced into bankruptcy and risk creating a radioactive mining legacy in the heart of Australia’s most recognised national park?

As the sun sets on Australia’s third mining boom, the uranium industry sinks into irrelevance against the backdrop of a rising renewable trade and analysts weigh up the social, economic and environmental cost benefit of this latest resource rush, the closure and clean up of Ranger mine will be a test of our national ability to hold the extractives industry to account. How can mining and the use of our shared natural resources be conducted in the public interest and for broad benefit? How can we plan to avoid the boom bust cycle? Can resource development be used to alleviate poverty and not entrench the wealth disparity that leaves a handful with obscene profits and sacrifice zones with sickness?

But it is not just Ranger mine that urgently requires rehabilitation. The impacts and imposition of this highly hazardous mine on the entire Alligator Rivers region and particularly its Aboriginal population require remediation by both the company and governments who have worked systemically over decades to ensure its effective exploitation.

As Australia’s oldest and most contested uranium mine approaches its closure date there is an opportunity for forward-looking Territory and federal governments to act rationally, to accept the uranium industry’s proven unviability and to quietly and firmly close the door on this, our most controversial contribution to what remains the world’s most contaminating resource trade. Before that, there is a mine-site and a region to be cleaned up and rehabilitated, land returned to its rightful owners and included in the Kakadu National Park.