The Risky Rise of the Dams 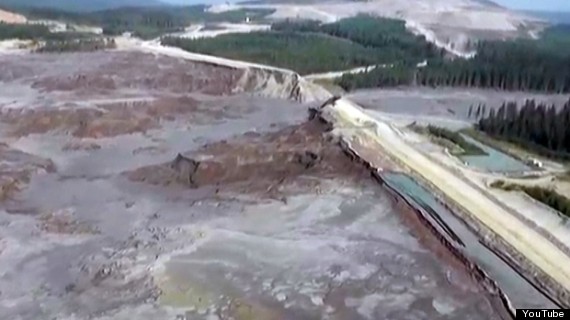 The average height of a tailings dam has grown from 120 metres in the 1960s to 240 metres today. Image of Mount Polley tailings dam spill by Cariboo Regional District.

A massive mining wastewater spill in the interior of British Columbia highlights a new global trend: tailing dams that hold waste are not only getting bigger, but posing greater risks to watersheds and communities downstream.

Drawing upon recent industry reports and presentations made by engineers living in the province, it’s clear that the complexities of the industry have multiplied and with them, risks to water are escalating.

Increased global mining production of substances such as iron ore, gold, copper and nickel along with rising metal prices has tripled the value of the industry from $200 billion to $600 billion over the last decade.

But due to declining ore quality, the sheer volume of waste produced by the industry, which can contain substances such as arsenic, lead and cyanide, is increasing.

Every year, the industry digs and moves as much solid rock (several thousand million tonnes per year) as all earthen materials transported by natural geological processes, such as landslides and erosion.

Because of the challenge of peak metals and high global demand, the mining industry faces a number of somber risks, as reported by Andrew M. Robertson of Robertson GeoConsultants at a recent mining conference.

It must not only dig deeper for poorer quality ores, but create larger and taller dams of tailings waste.

As a result, the dykes that contain the waste have been growing higher and larger every year. The average height of a tailings dam has grown from 120 metres in the 1960s to 240 metres today. They also contain more water than ever before, reported Robertson.

In addition, the growing size of mines means that the industry is “increasingly dominating regional water supply and quality. Our structures to control water have become large and threatening,” reads Robertson’s presentation.

Every 30 years, the volume of water and tailings produced by the industry increases tenfold, said Robertson. Meanwhile, the area of waste deposits increases fivefold and the height of dams grows twofold. “We are not dam building — we are terraforming,” he told a Tailings and Mine Waste conference in 2011.

Across the world, the rate of dam failures containing mining waste now averages 1.7 a year. That’s a much higher rate than conventional hydro dams.

Norbert Morgenstern, a world authority on the structures, has reported that the reliability of tailing dams is “among the lowest of earth structures.” In addition, he has said, “well-intentioned corporations employing apparently well-qualified consultants is not adequate insurance against serious accidents.”

According to studies by engineers Michael Davies and Todd Martin, there appears to be a strong correlation between mining booms and subsequent dam failures.

During mining booms, governments hand out permits quickly; industry tries to save money and cut costs; engineers flit from project to project; and industry favours “cookie cutter” designs. The frequency of dam failures can be expected to increase shortly thereafter, they found.

Mining activity can be transient, but its impacts are often permanent. Lead and zinc mining in northern England still pollutes a river catchment over an area of 12,000 square-kilometres.

And abandoned mines in northern Canada still threaten waterways with tonnes of arsenic and cyanide.

BC ‘unmatched’ in waste challenges

Mine waste can come in solid or fluid form that can leach toxic metals or generate acids that destroy aquatic life.

In its early days, the mining industry often dumped waste into the oceans, rivers and lakes. Tailing dams came into increasing use starting in the 1950s in British Columbia.

Nevertheless, dumping waste hasn’t stopped. According to a 2012 report by MiningWatch Canada, “mining companies dump 180 million tonnes of toxic mine waste, also called tailings, into oceans, rivers and lakes. That is the equivalent of 1.5 times the amount of municipal solid waste that the United States sent to landfills in 2009.”

But building dams to hold mining waste, according to Burnaby-based engineer Todd Martin, introduced its own set of problems.

“Instead of natural basins as repositories for waste rock and in particular tailings, the industry must engineer, construct, monitor and maintain large embankment dams and impoundments, many of which must be maintained in flooded condition in perpetuity,” he said at a recent conference.

Stewardship of such facilities is no easy feat, particularly in British Columbia, where “water bodies are ubiquitous, rainfall and snowfall are substantial, and terrain readily amenable to the development of impoundments required to remain stable in perpetuity can be hard to come by,” Martin said.

B.C., one of the world’s major mining centres, operates more than 50 mines in mountainous wet terrain and that reality, according to Martin, “poses a formidable challenge to the management of tailings or mining waste.”

Combined with other geohazards including earthquakes and climate change, Martin describes B.C. as a setting “unmatched in its mine waste challenges.”

The Alberta oilsands represent one of the world’s largest collections of mining waste at 830 million cubic metres. Each barrel of bitumen produces about 1.5 barrels of salty and acidic fluid waste.

As a consequence, tailing ponds cover 180 square-kilometres of forest land. The Pembina Institute calculates that the industry will create “enough toxic waste to submerge New York’s Central Park to a depth of just over 11 feet every month” by 2022.

Building larger flooded impoundments to hold more and more mining waste is currently the global status quo in the industry. As a consequence, the frequency of serious incidents has not declined since 1968.

Engineer Martin suspects that the only way industry and society can reduce the probability of a failure is to hope for a better technology, find different ways to bury acid mine waste than under water, and continuously improve all aspects of dam safety stewardship.

Other engineers think small mines built only in places conducive to secure dams might be the answer, as well as technologies that produce dry tailings. Conservation of minerals and global population control might also be good ideas.

As B.C. ramps up mining activity, the number of dams holding back mining waste will increase substantially. In the process, warns engineer Martin, the province will find itself as much in the dam safety business as BC Hydro.